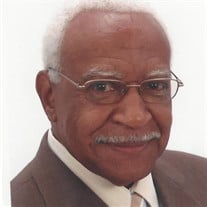 Willie J. Wallace, son of the late Richard Wallace and the late Marrie Johnston Wallace, was born Tuesday, February 25, 1936, in Chester County, South Carolina. Upon his family relocating to Steelton, PA, Willie was educated in the Steelton-Highspire School District. “Chuck,” as he was known by family and friends, served his country honorably in the United States Marine Corps during the Korean War and was the recipient of the Good Conduct Medal and the National Defense Service Medal. Chuck retired from the Bethlehem Steel Company and, thereafter, worked for several companies keeping himself busy after his retirement. As a longtime member of the Beulah Baptist Church, Steelton, PA, he served faithfully with the Choir and Usher Ministries. At eighty-three years of age, Willie J. Wallace exchanged mortality for immortality on Saturday, July 27, 2019, joining in eternal life his parents and his sister, Rose Marie Wallace. He is survived by his six children, Pastor Michael Wallace and his wife Pastor Joann, Todd Wallace and his wife Gloria, Brandon Wallace, Drinda Wallace, Terry Spradley and her husband Donald, and Vanesa Brooks, all of Harrisburg, PA; five sisters, Georgianne Manning of Riverview, FL, Bertha Johnson and Shirley McKenion, both of Tampa, FL, Louise Cook of Chester, SC, and Rachel Powell and her husband Gary of Harrisburg, PA; two brothers, Jerry Wallace and his wife Dale of Harrisburg, PA, and Dennis Wallace of Scranton, PA; as well as a host of grandchildren, great-grandchildren, nieces, nephews, cousins and friends.

The family of Mr. Willie J. "Chuck" Wallace created this Life Tributes page to make it easy to share your memories.

Willie J. Wallace, son of the late Richard Wallace and the late...