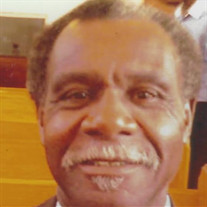 William Andrew Thompson, affectionately known as “Hawk” by family and friends, was born Sunday, December 15, 1935, in Lewiston, North Carolina, to the late Andrew and Alice Thompson. He was educated in the Bertie County School System. Hawk relocated to Harrisburg, PA, in the early 1950’s. He retired from the construction industry, Local Union #1180, and was a respected and well-known barber in the community for many years. The camaraderie and wisdom he shared in the barbershop will long be remembered. He was a pleasant man always laughing, and you sometimes got a good piece of advice along with his laughter. Hawk met the love-of-his-life and married Fannie P. Matthews on October 7, 1972. This union was blessed with one child. He was a dedicated member of Beulah Baptist Church since 1956. His church ministry was through the donation of fruits and vegetables to the various church groups, events and the community, earning him the nickname, “Vegetable Man.” Hawk touched the lives of everyone he met whether through frequent trips down south to visit family and drop off various fruits and vegetables; the many trips to various auctions; hosting family members who were just driving through for a day or two, or longer; helping family and friends with garden and yard work; conversations with longtime neighbors and friends; or blessing friends and family with fruits, vegetables and flowers. Hawk meticulously tended his gardens and unselfishly shared his bounty. On Friday, August 2, 2019, at eighty-three years of age, Mr. William Andrew “Hawk” Thompson peacefully transitioned from time to eternity. Along with his parents, he was also preceded in death by one son, William McCoy; four brothers, Cola Lee, Spencer, James, and Zachariah; and four sisters, Mary, Sidney, Adrienne, and Willie Otelia. He leaves to lovingly honor his legacy and share many irreplaceable memories his devoted and loving wife, Fannie P. Thompson; two sons, Darrell Andrews and his wife DeVita, and Marcus Thompson and his wife Courtney; two sisters, Mildred Davis, and Mary Cherry and her husband Winfred; two brothers, Rudolph Thompson and his wife Lisa, and Charles Smallwood and his wife Lillie; his grandchildren, Tara Thompson, Da`rell Andrews, Wesley Thompson, Keishaun Thompson, Darin Thompson, and Kennedy Thompson; great-grandchild, Jamir Thompson; and a host of nieces, nephews, cousins, and beloved friends. Giving God all Glory, Honor and Praise, Lovingly Submitted by the Family of Mr. William A. “Hawk” Thompson In lieu of flowers, memorial donations may be made to his church, Beulah Baptist Church, 100 Livingston Street, Steelton, PA, 17103 and/or the Boys and Girls Club, 1227 Berryhill Street, Harrisburg, PA 17104

William Andrew Thompson, affectionately known as &#8220;Hawk&#8221; by family and friends, was born Sunday, December 15, 1935, in Lewiston, North Carolina, to the late Andrew and Alice Thompson. He was educated in the Bertie County School System.... View Obituary & Service Information

The family of Mr. William Andrew Thompson "Hawk" created this Life Tributes page to make it easy to share your memories.