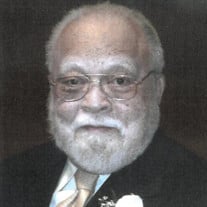 “Preach the word: be ready in season, out of season; reprove, rebuke, exhort with all longsuffering and teaching.” II Timothy 4:2 Rev. Dr. W. Braxton Cooley Sr., a native of Raleigh, North Carolina, was born August 23, 1934, son of the late John Lee Cooley and Ada (Perry) Cooley. He was the youngest of six siblings. Dr. Cooley received the B.A. in Social Studies and Religious Education from Shaw University. He received the M.L.S. in Library Science and Education from the North Carolina Central State University (NCC) in Durham, North Carolina at Durham. Additionally, he received the M.Div. (cum laude), Ph.D. and D.Min., respectively, from Drew University, Madison, New Jersey. He holds a Certification in Clinical Pastoral Education. Dr. Cooley began his pastoral ministry at the age of nineteen. He has served churches in North Carolina, Ohio, New Jersey and Pennsylvania. In 1974, the Lieutenant Governor of Pennsylvania invited Dr. Cooley to establish a Certified Chaplaincy Training Program to train chaplains for the Pennsylvania Correctional System. In 1978, he transferred to the Harrisburg State Hospital as Facility Chaplaincy Program Director also with a mandate to establish a similar training program for the Pennsylvania Department of Mental Health. In 1988, the Commonwealth of Pennsylvania conducted a national search for a new Director of Chaplaincy Services and with forty-nine applicants for the position. Due to Dr. Cooley’s demonstrated theological knowledge and leadership in all areas of mental health and mental retardation, he was appointed by the governor as Director of Commonwealth Chaplaincy Services and served in that position for eleven years. In 1980, the Lord led Dr. Cooley to The First Baptist Church of Steelton, Harrisburg, PA, where he served as Interim Pastor and was later called as Pastor. He completed thirty-four years of leadership. Upon his retirement as Pastor of The First Baptist Church of Steelton, he united in Christian fellowship with The Greater Zion Missionary Baptist Church. Dr. Cooley served as Adjunct Professor to three theological seminaries, Moderator of the Central Baptist Association, Regional Vice President of the Pennsylvania Baptist State Convention, President of the Harrisburg Interdenominational Minister’s Conference and later of the Steelton African-American Minister’s Alliance. Dr. Cooley served two four-year terms with the Susquehanna Township School Board and Vice President of the Harrisburg Urban League. He was a Life and Golden Heritage Member of the NAACP and a Life Member of Phi Beta Sigma Fraternity. He was nominated and accepted as a member of Who’s Who in Religion and Clinical Pastoral Education and his vita appeared in the 2008 directory. Dr. Cooley has been married to Dr. Iris (Hairston) Cooley for over sixty years, and they are the happy parents of two adult children, William Braxton Cooley Jr. and Dr. Anjilla Joye Codner. In Dr. Cooley’s own words, “God has allowed me to have more than 63 joyful years in the ministry and has brought me through many grave illnesses. My wife and children have been faithful to stand and support me through it all. In 2005, I underwent the mother of all surgeries, but it was there and then that my church family, The First Baptist Church of Steelton, rose to the challenge, prayed and supported me and my blood family through. In 2009, I underwent another cancer surgery of the chest to remove a cancerous growth between the heart and lungs, and I was given up by the medical staff to die, but here I stand today by God’s grace. By man’s words, I am not supposed to be here, but by God’s command, I am here. Thanks to my church family and others who prayed, most of all, thanks to God for being real.” Dr. Cooley transitioned from labor to reward on Sunday, June 6, 2021. He was preceded in death by his parents, John Lee Cooley and Ada (Perry) Cooley, and his siblings, Lacy McNair, James D. Cooley, Ruby Cooley, Anthony Lee, Gracie Ferrell and Sidney W. Cooley. Dr. Cooley leaves a legacy to be honored and cherished by his devoted wife, Dr. Iris Opal (Hairston) Cooley; son, W. Braxton Cooley Jr.; daughter, Dr. Anjilla Joye (Cooley) Codner; son-in-law, Wayne F. B. Codner; sister, Mary Alice Veasey; sisters-in-law, Rita and Dorothy Hairston; his church families, many cousins, nieces, nephews and many devoted friends. In lieu of flowers, memorial donations in Dr. Cooley's name may be made to the United Negro College Fund and/or the NAACP. Donation links listed below: https://secure2.convio.net/uncf/site/SPageNavigator/Donate.html?_ga=2.25112831.475807349.1586216221-160892873.1585936414 https://naacp.org/donate CLICK ON THE PHOTOS & VIDEOS ON-LINE STREAMING OF SERVICE TAB OR MEDIA TAB (MOBILE) AND TRIBUTE WEBCAST TO VIEW SERVICE. FAMILY AND FRIENDS ARE ENCOURAGED TO CLICK ON THE SHARE A MEMORY TAB TO POST VIDEOS, SHARE MEMORIES, CONDOLENCES, REFLECTIONS OR SIMPLY YOUR NAME.

“Preach the word: be ready in season, out of season; reprove,...