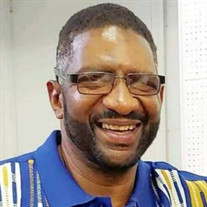 Steffan F. Johnson, son of the late Charles F. Johnson, Jr. and Nancy (Johnson) Thomas, was born Monday, August 21, 1961, in Harrisburg, Pennsylvania. Steffan was a product of the Harrisburg School District and was employed by Higher Design Barber Studio in York, PA. Over the years, he also worked at “Just Kuttin It Up,” “Panache Plus” and “Beltway Barbers,” to name a few. A legend in the world of barbering, Steffan earned the title of “Kut Kreator” by his family and friends.” He had a love and passion for cutting hair and was sought after as a premier barber in the Harrisburg, Maryland and York areas. He began his barbering career in the basement of his mother’s home on Curtin Street in Harrisburg. Steffan was a loving mentor to many and, foremost, he loved his family. Steffan was a follower and supporter of Tony Evans, Pastor of the Oak Cliff Bible Fellowship Church, Dallas, Texas. He loved to read the Word of God and counseled and mentored all those willing to receive Godly wisdom. Most recently, Steffan achieved his goal of becoming a Certified Recovery Drug Specialist and a Certified Barber Teacher. In York, Pennsylvania, on Tuesday, December 22, 2020, at fifty-nine years of age, Steffan departed this life joining in eternal life his father, Charles F. Johnson; his stepfather, Robert E. Thomas; sister, Michelle Crosson; and his brother, Darryl Johnson. Steffan leaves to cherish irreplaceable memories his mother, Nancy (Johnson) Thomas of Harrisburg, Pennsylvania; son, Steffan Amir Johnson of Harrisburg, Pennsylvania; daughter, Nycole Brown of Charlotte, North Carolina; his siblings, Fred Wamsley (Carol) of Landisville, Pennsylvania, Brigitte Johnson, Erica Johnson, Kirk Johnson, all of Harrisburg, Pennsylvania, and Angela Thomas of Gettysburg, Pennsylvania; four grandchildren, two great-grandchildren, uncles, FAMILY AND FRIENDS ARE ENCOURAGED TO CLICK ON THE SHARE A MEMORY TAB TO POST VIDEOS, SHARE MEMORIES, CONDOLENCES, REFLECTIONS OR SIMPLY YOUR NAME ALLOWING THE FAMILY TO KNOW YOU ARE THINKING OF THEM. CLICK ON THE PHOTOS & VIDEOS ON-LINE STREAMING OF SERVICE TAB OR MEDIA TAB (MOBILE) AND TRIBUTE WEBCAST TO VIEW.

The family of Steffan F. Johnson "Kut Kreator" created this Life Tributes page to make it easy to share your memories.