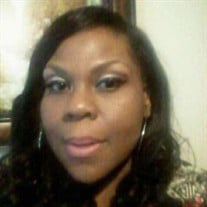 Samika was born Tuesday, February 10, 1970, in Harrisburg, Pennsylvania, daughter of Alexander McMillian and Maggie (Cheairs) Murphy. A graduate of Harrisburg High, Class of 1988, Samika was employed by Highmark. Some of Samika&#8217;s most... View Obituary & Service Information

The family of Samika Yvonne Jones created this Life Tributes page to make it easy to share your memories.

Send flowers to the Jones family.