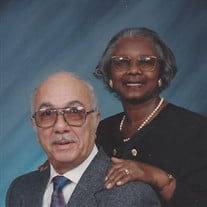 Sadie, the third and last surviving child of the late Adam Hatcher and the late Rosa (Dearmin) Hatcher, was born Wednesday, May 21, 1924, in Surry County, North Carolina, where she received her formal education. Sadie’s employment path included the Pennsylvania Turnpike Commission and the Department of Revenue. Along with other family members, Sadie was united in Christian fellowship with The First Baptist Church of Steelton for many years. She faithfully attended church and enjoyed working alongside her mother in the preparation and festivity of the church’s Annual All-Church Tea. Sadie was united in holy matrimony to the late Jerry L. Penn Sr. leading a quiet and fulfilling life sharing sixty-two years together at the time of his passing. Sadie and Jerry were inseparable; if you saw one, you saw the other. A devoted and loving homemaker, she especially enjoyed Sunday and holiday dinners. Her Lincoln Street, Steelton, PA, home was meticulously cared for and abounded with beautiful flowers which she lovingly tended. She would sit on her front porch enjoying the beauty of her flowers, talking to her neighbors and being greeted as “Mom Penn.” She enjoyed cooking, watching quiz shows, football and baseball; however, and most importantly, she was totally committed to her family. Even though Sadie was a quiet, unassuming lady, you best believe she could get her point across when needed. At the blessed age of ninety-five, on Saturday, August 31, 2019, Sadie Belle Penn transitioned from time to eternity joining her parents, husband, two sons, two sisters, four brothers and her granddaughter, Tomeka A. Penn. She leaves to cherish many special memories two sons, Jerry L. Penn Jr. and his wife Patricha and Terry B. Penn, all of Harrisburg, PA; one granddaughter, Angell M. Penn of Windsor, CT; three great-grandchildren, Blake Okoloji, Sadie Downes and Andre Downes; one godchild, other relatives and friends. Giving God all Glory, Honor and Praise, Lovingly submitted by the family

Sadie, the third and last surviving child of the late Adam Hatcher and the late Rosa (Dearmin) Hatcher, was born Wednesday, May 21, 1924, in Surry County, North Carolina, where she received her formal education. Sadie&#8217;s employment path... View Obituary & Service Information

The family of Mrs. Sadie Belle Penn created this Life Tributes page to make it easy to share your memories.

Sadie, the third and last surviving child of the late Adam Hatcher...