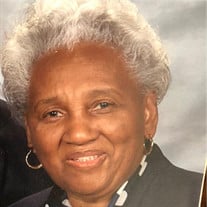 Patricia Ellen Dockens went home to glory in the arms of angels in the presence of her family on Wednesday, September 1, 2021, at eighty-seven years of age. Born on Thursday, November 30, 1933, in Harrisburg, PA, she was the daughter of the late Harry Devan and Susie (Banks) Lester. She received her formal education in the Harrisburg School System and was a 1951 graduate of the former William Penn Senior High School where she met and married the love-of-her-life for sixty-eight years. Tish, as she was affectionately known by her family, was a dedicated, loving and devoted wife, mother and grandmother who chose to stay at home to nurture her loving family, and she always enjoyed the time spent with them as well as her extended family. She made an apple pie that will be imitated, but not duplicated. Having accepted the Lord as her personal Savior, Patricia was a faithful member of Monroe Street Church of God which later became Trinity Church of God. Patricia never missed attending church even during her illness. She served in various positions in her church to include Supervisor of the Kitchen Committee, Usher, PAC and the Flower Guild. In her leisure, she enjoyed doing crossword puzzles, shopping and having good laughs with the grandkids. In addition to her parents, Patricia was also preceded in death by two of her brothers, Jack Devan and Charles Devan; a special daughter, Wanda Banks Pierce; and her granddaughter, Tiana Dockens. Patricia leaves to cherish precious memories of her: a loving husband, Walter R. Dockens Sr. of Harrisburg; five daughters, Diane Jones (Sam), Wanda R. D. Williams (Jerome Sr.) of Harrisburg, Leslie Roberson (Rick Sr.) of Asheboro, NC, Darla Hopkins (Michael) of Dayton, OH, Annette Brown (Ralph Adolph) of Harrisburg; and one son, Rev. Walter R. Dockens Jr. (Aigner) of Harrisburg. Her memory will also be honored by her twenty grandchildren, fifty-four great-grandchildren, fifteen great-great-grandchildren; her four siblings, Kay Patton (Jimmie) of Nashville, TN, Renee Conway (David) of Jackson, GA, Harry Devan (Harriet), Walter Devan (Curlene) of Harrisburg; three loving cousins, Margie Humes, Joan Gilchrist, Jesse Alphonso Sr.; two loving friends, Peggy Dickey, Gwen Humes; as well as a host of nieces, nephews, cousins and friends. Lovingly Submitted by Patricia’s Family FAMILY AND FRIENDS ARE ENCOURAGED TO CLICK ON THE SHARE A MEMORY TAB TO POST VIDEOS, SHARE MEMORIES, CONDOLENCES, REFLECTIONS OR SIMPLY YOUR NAME.

Patricia Ellen Dockens went home to glory in the arms of angels in the presence of her family on Wednesday, September 1, 2021, at eighty-seven years of age. Born on Thursday, November 30, 1933, in Harrisburg, PA, she was the daughter of the... View Obituary & Service Information

The family of Patricia Ellen Dockens created this Life Tributes page to make it easy to share your memories.

Patricia Ellen Dockens went home to glory in the arms of angels...

Send flowers to the Dockens family.