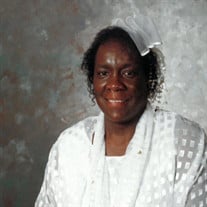 Patricia Agnes Meredith Ewell Chase entered eternal rest July 8, 2020, at her home. She was preceded in death by her parents, Bishop Myles and Mother Jannie Meredith; her siblings, Margaret L. Steele, Bishop Robert Lee Meredith, Thelma V. Jenkins, Mary Jane Wright, George D. Meredith and Nathaniel Meredith. Pat, lovingly known by family as "Ressie” or “Aunt Ressie” (after her maternal grandmother, Ressie Britton), was born July 24, 1945, in Harrisburg, PA, the seventh child to the late Bishop Myles and Mother Jannie Meredith. She graduated from John Harris High School in 1964. Reared in holiness, she was baptized at an early age. Pat married William Ewell in 1972, and to this union two children, Joelle and Lamont, were born. Wanting to become a good example for her kids, Ressie received the gift of the Holy Ghost and diligently worked at New Day Way of the Cross Church of Christ, the church her father founded in 1937. Working with the choir was the beginning of her many contributions to the church; winning souls was her main objective. She became President of the Youth for Christ serving for many years and singlehandedly raising money for building funds by chartering church bus trips for youth activities, getting the young people to annual jubilees, conventions and church picnics. Her weekend dinners became expectant amongst the church neighborhood. Working as a mentor to the teenagers, she consistently brought souls to Christ. “Sister Ewell,” as called by church family, was a faithful member of her father’s church. She was involved in many church auxiliaries. She formed the Birthday Club, Sick Committee, joined the Pastor’s Aide Committee and became the editor of the New Day Way of the Cross Starr Newsletter. She worked to become President of the Usher Board, again, singlehandedly transported saints weekly back and forth to Sunday School and church services for over 30 years. Her concern for people did not stop there. She opened a Personal Care Home for disabled veterans. Affectionately known as “Mrs. Ewell” to her patients, she nursed and took care of 9 to 12 state hospital patients herself and without a staff, feeding and distributing medications and giving them a very comfortable atmosphere to live in. She kept this up for many years. She went on to become a foster parent through the Dauphin County Youth and Catholic Charities. She cared for more than 10 children throughout her 20-year tenure. She also performed private duty care for the elderly for many years. Throughout all the venues of her life, Sister Ewell became a “fisher-of-men” as co-workers at various hospitals where she was employed followed her to church and became workers for the Lord. After the death of her husband of 17 years, 8 years later she married childhood friend, Thomas Chase. He stayed by her side while she went on and founded Apostolic Temple of Christ Church where 64 people were baptized through her ministry. Seeing a need for the children of Harrisburg to express their views and become spiritually educated, Missionary Chase founded the Children We Care Association. Weekly meetings were held at various community centers throughout the Harrisburg area until her health became a serious issue, and she was not able to keep up with the demanding schedule. Of all the unrecognized seen and unseen work this woman of God accomplished, she still held dear that “Only God knows what tomorrow holds.” Sickness might have plagued her body, but it did not stop her from her passion, WITNESSING FOR CHRIST AND WINNING SOULS FOR JESUS. On any given day you might find her in the streets and malls passing out spiritual handouts and inviting people to her church. For she looks to the Hills from whence cometh her health and her help cometh from the Lord. Patricia Chase is survived by her son, W. Lamont Ewell (Kijuanna), daughter, Joelle E. Ewell, all of Harrisburg, PA; 7 grandchildren, Gary Jones II, Isaiah Ewell-Ramsay, Ania, Nehemiah, Noah, Noriah and Neziah Ewell; siblings, Brother Myles Meredith (Pearl), Dorsey Meredith (Carolyn), all of Harrisburg, Carol Glover (Marvin) of Washington, DC; brother-in-law, Charles Wright of Waldorf, MD; sister-in-law, Rose Meredith of Jacksonville, NC; and a host of loving nieces and nephews. FAMILY AND FRIENDS ARE ENCOURAGED TO CLICK ON THE SHARE A MEMORY TAB TO POST VIDEOS, SHARE MEMORIES, CONDOLENCES, REFLECTIONS OR SIMPLY YOUR NAME ALLOWING THE FAMILY TO KNOW YOU ARE THINKING OF THEM. ON-LINE STREAMING OF SERVICE. CLICK ON THE PHOTOS & VIDEOS TAB OR MEDIA TAB (MOBILE) TO VIEW.

The family of Patricia Agnes Ewell Chase created this Life Tributes page to make it easy to share your memories.

Send flowers to the Chase family.