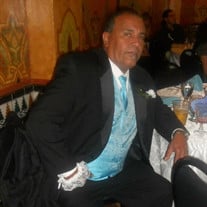 Nelson Saez, known as “Pino” by family and friends, was born in Guayama, Puerto Rico, on Wednesday, August 27, 1958, son of the late Domingo Saez and the late Romona Arce- Saez. At sixty years of age, while residing at his sister’s home in Harrisburg, Pennsylvania, Nelson departed this life on Saturday, September 8, 2018. Not only was he preceded in death by his parents but also his brother, Gexon Saez. Nelson’s life will be remembered and cherished in the hearts of his four sisters, Evelice Buitrago, Maria Santiago, Maria DeJesus, Rosa Mills, all of Harrisburg; two brothers, Josue Saez of Blaine, PA, Noel Saez of Harrisburg; his daughter, Jeanine Saez-Burgos, son-in-law, Miguel Burgos of Erie, PA; two granddaughters, Alyina Janelle Burgos, Jaylene Isabell Burgos; other relatives and friends.

The family of Mr. Nelson "Pino" Saez created this Life Tributes page to make it easy to share your memories.

Nelson Saez, known as “Pino” by family and friends, was born...

Send flowers to the Saez family.