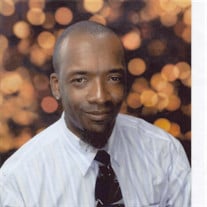 Nelson Brewster Jr., 47, was called home to our Lord on May 2, 2022. He was born on September 26, 1974 in Philadelphia, Pennsylvania. He was the first born to Stephanie Lewis and Nelson Brewster, Sr. Nelson was educated in the Philadelphia, Johnstown, Lancaster, York, and Harrisburg, Pennsylvania public school systems. And he attended Dauphin County Vocational Technical High School where he focused on electronics. He received awards and honors at VoTech for his electronic work. Nelson loved electronics and music from a young age. He had an unusual passion and gift for electronics and audio equipment. When he was still in high school he would set up shop outside of Barry Carter's on 6th Street to fix and install radios and speakers that people purchased inside of the store. With time, Nelson grew his business. He worked hard as an entrepreneur and owner of NoiseGate Car Audio, located in Harrisburg, Pennsylvania for over 30 years. His latest creation at work was called "Nolan Forms," a custom-made speaker housing, that he intended to get patented. He had a reputation for doing remarkably high quality work. He was well-liked and befriended a lot of people through his line of business. Nelson was a hard worker, however, outside of work he loved going camping in his RV, riding his motorcycle with his Sons of Black Caesar motorcycle club, spending time with his son, eating out, and watching movies on his big screen TVs. One of his favorite restaurants to eat at was Palumbo's Italian Eatery downtown for a good slice of pizza. After a long day of work Nelson would sit at the dining tables outside to relax while he played music on his motorcycle. He was also a model car enthusiast. Nelson was a doting father, a wonderful son and brother, and a generous, kind human being. He was always ready to listen, had a quick wit along with a wry sense of humor that prompted folks to smile and laugh. Nelson leaves behind to cherish his memory: his son, Nolan; his mother and step-father, Byron and Stephanie Lewis; his father and step-mother, Nelson and Rosa Brewster; his sister, Kiyona Joi Brewster; his step-brother, Woodrow Coates; and a host of aunts, uncles, cousins, other family members and friends. He will be truly missed by all who knew and loved him. FAMILY AND FRIENDS ARE ENCOURAGED TO CLICK ON THE SHARE A MEMORY TAB TO POST VIDEOS, SHARE MEMORIES, CONDOLENCES, REFLECTIONS OR SIMPLY YOUR NAME. CLICK ON THE PHOTOS & VIDEOS ON-LINE STREAMING OF SERVICE TAB OR MEDIA TAB (MOBILE) AND TRIBUTE WEBCAST TO VIEW SERVICE.

Nelson Brewster Jr., 47, was called home to our Lord on May 2, 2022. He was born on September 26, 1974 in Philadelphia, Pennsylvania. He was the first born to Stephanie Lewis and Nelson Brewster, Sr. Nelson was educated in the Philadelphia,... View Obituary & Service Information

The family of Nelson Brewster Jr. created this Life Tributes page to make it easy to share your memories.

Send flowers to the Brewster family.