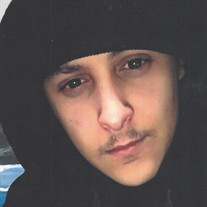 Michael was born July 28, 1996, in Harrisburg, PA, son of Michael David Vanasco Sr. and Angela R. Gorecki. At a very young age, Michael had an obsession with cars which led him to pursue a career of becoming a Master Mechanic, future automobile... View Obituary & Service Information

The family of Mr. Michael David Vanasco Jr. created this Life Tributes page to make it easy to share your memories.

Send flowers to the Vanasco family.