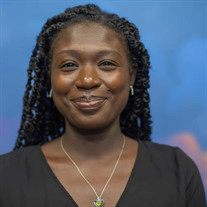 Our beloved Meredith Nicole Greene was born to Gregory G. Greene Sr. and Sandra R. Reid on Thursday, August 6, 1992, in Harrisburg, PA. She attended Harrisburg High School (Sci-Tech) and was involved in multiple extracurricular programs during her time there. While at Harrisburg High, Meredith ran track and field for the Harrisburg Cougars. She competed in the long jump, high jump, and was a sprinter. Our angel also performed in the Marching Cougar Band. Meredith was gifted with the ability to play multiple instruments. She played the flute, saxophone, and was the section leader of the tuba line. Our beauty graduated from Harrisburg High in 2010. Meredith completed a few credits in finance at Central Penn College. Ultimately, Meredith decided to pursue her dreams, and she set out to have a career in acting. Meredith completed Barbizon Modeling and Acting School on July 16, 2017. During her time at Barbizon, Meredith studied techniques that she would use to launch her career. She booked a few photoshoots in New York, Orlando, and Philadelphia. A born star, she also became involved in two different theatre groups: the Gamut Theatre Group and the Sankofa African American Theatre Company. At the Gamut Theatre Group, Meredith performed in Gallathae (Diana), A Midsummer Night's Dream (Lysandra), and Pericles (Thaisa). As a Sankofa African American Theatre Company member, she performed in several productions. She performed in Voices of the Eighth (Hannah Jones/Anne Amos), For Colored Girls Who Have Considered Suicide, When the Rainbow Is Enuf (Lady in Green), Pretty Fire (Mother/Ensemble), and in Voices of F.E.W (Whisperer). As a member of these theatre companies, Meredith made a serious commitment to her roles and her fellow actors and crew. Meredith had to commit to daily rehearsals for every performance, which often would run late. She was able to juggle learning her lines, attend rehearsals and, most importantly, she was a dedicated and devoted mother to Royal and August. Meredith had an internship with Ed Collins from 2010 until 2014. She worked at Arooga’s Bar and Grill from 2008 until 2015. During this time, she worked her way from being a server to a bartender. Before her life tragically ended, Meredith worked at Freshido, managing in the Hershey, Mechanicsburg, and Harrisburg locations. Family was everything to Meredith. She was a loving mother, a devoted daughter, and a true sister. She enjoyed puzzles, board games, and she was a Harry Potter fan. Meredith grew up loving to travel. On her last vacation, she went to Universal Studios with her loving fiancé Tyler and princess sister Brittonie. Meredith and her immediate family were planning to move to Atlanta, GA. Her dream was to further her acting career and work at Tyler Perry Studios one day. Meredith was always supportive to her family. She provided her mother with support and care at the time of her stroke. Meredith also helped Tia, her Aunt Angie, and other family members whenever she could. She always had a listening ear for those when their lives got hectic. Meredith was an example and often encouraged her baby sister Brittonie to do the same. Meredith is survived by her daughters, Royal (age 7) and August (age 6) Thames; her mother, Sandra R. Reid of Harrisburg; loving father, Gregory G. Greene Sr. (Alexandra) of Maryland; beloved sisters, Carole L. Greene of Maryland, and Brittonie A. Meredith of Harrisburg; and loving brother, Endrea J. Reid of Harrisburg. Her legacy will continue to live on through her immediate family, cousins, and a host of relatives and friends. PUBLIC VIEWING; PRIVATE SERVICE FAMILY AND FRIENDS ARE ENCOURAGED TO CLICK ON THE SHARE A MEMORY TAB TO POST VIDEOS, SHARE MEMORIES, CONDOLENCES, REFLECTIONS OR SIMPLY YOUR NAME. CLICK ON THE PHOTOS & VIDEOS ON-LINE STREAMING OF SERVICE TAB OR MEDIA TAB (MOBILE) AND TRIBUTE WEBCAST TO VIEW SERVICE.

The family of Meredith Nicole Greene created this Life Tributes page to make it easy to share your memories.

Send flowers to the Greene family.