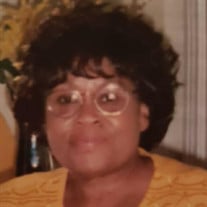 Mattie Mae Williams, the youngest child of the late Farris Earle and Lula Bell Earle, was born Saturday, March 13, 1937, in Belmont, North Carolina. Mattie attended Reid High School in Belmont, and later moved to Baltimore, Maryland. Mattie’s Christian fellowship and Christian journey included membership at Carter Memorial Church of God in Christ, Baltimore, where she served for ten years and met Mr. James Williams. Now Mrs. Williams, she moved back to Belmont, where she joined the Saint Hannah Fire Baptist Holiness Church under the pastorate of the late Mavis Charles. It was there the Lord called her to preach/minister His Word, and she received her preaching/minister’s license. In 1969, she moved to Harrisburg, Pennsylvania, where she joined Mt. Zion Church of God in Christ under the pastorate of the late Elder C. T. Bennett. The Lord moved upon Mattie’s heart to start a church, Fire Baptist Church, with the assistance of Pastor Bennett and the saints. The church congregated in her living room and was later moved to the Edgemont area in Harrisburg. There, she helped the late Elder and Sister Moses in their ministry, and the late Pastor Wilbert Manigault was right by her side. Mattie returned to Mt. Zion Church of God in Christ under the pastorate of Elder Reginald Frison where she remained a member. Mattie retired from the Commonwealth of PA, Department of Transportation after thirty years of service. She loved sharing the Word of God, cooking and watching the TV miniseries, “Lonesome Dove.” On Wednesday, November 25, 2020, at eighty-three years of age, the angels escorted Mattie Mae Williams into life eternal joining her parents, beloved son, Barron B. Earle; and her siblings, Rose Lee Diggs, Willie Mae Stowe, Farris Earle Jr., Jessie Mae Grier and Ver Lee Earle. She leaves a legacy of love, faith and commitment to her Lord and Savior Jesus Christ to be honored and cherished by her grandchildren, Barron, Shawn, Edward and Damion Earle, Amaya Black, Melissa Horton; her niece and trusted caretaker, Patricia Ann Chatman; as well as a host of great-grandchildren, nieces, nephews, cousins, saints and friends. FAMILY AND FRIENDS ARE ENCOURAGED TO CLICK ON THE SHARE A MEMORY TAB TO POST VIDEOS, SHARE MEMORIES, CONDOLENCES, REFLECTIONS OR SIMPLY YOUR NAME ALLOWING THE FAMILY TO KNOW YOU ARE THINKING OF THEM. ON-LINE STREAMING OF SERVICE. CLICK ON THE PHOTOS & VIDEOS TAB OR MEDIA TAB (MOBILE) AND TRIBUTE WEBCAST TO VIEW.

The family of Mattie Mae Williams created this Life Tributes page to make it easy to share your memories.