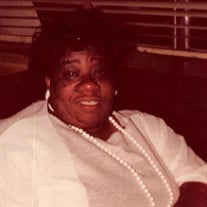 Marcella O. Weaver, affectionately known as “Tootie” by family and friends, daughter of Elgene Weaver, Jessie White, and raised by her devoted Aunt Lucille Chipley, was born Wednesday, August 6, 1930, in Statesville, North Carolina. She received her formal education at the Unity School of Statesville. Our beloved Queen was a hairstylist and a homemaker who enjoyed sewing and cooking. She was a devoted soap opera watcher. With her quick wit, she would keep you laughing, and she didn’t mind telling you exactly “what was what.” With her calm, sweet demeanor, she made everyone feel like they were special to her. On Tuesday, May 12, 2020, at eighty-nine years of age, while at the Gardens at Camp Hill, Camp Hill, PA, Marcella transitioned from time to eternity. She leaves to celebrate her legacy and share loving memories her siblings: sisters, Catherine Harris of Burlington, NC, Mary Francis Clark, brother, Freddie Young, sister, Diane Hunter, all of Statesville, NC; her children: daughter, Peggy Gillespie-Morrison, sons, Donald Weaver, Jerol Weaver, daughters, Towanda Weaver, Priscilla Harris, Cynthia Weaver, Brenda Lackey, son, Dennis Lackey, all of Harrisburg, PA; thirty-six grandchildren, twenty-eight great-grandchildren, twenty-three great-great-grandchildren, and other family members. FAMILY AND FRIENDS ARE ENCOURAGED TO CLICK ON THE SHARE A MEMORY TAB TO POST VIDEOS, SHARE MEMORIES, CONDOLENCES, REFLECTIONS OR SIMPLY YOUR NAME ALLOWING THE WEAVER FAMILY KNOW YOU ARE THINKING OF THEM DURING THIS TIME OF BEREAVEMENT. ON-LINE STREAMING OF SERVICE. CLICK ON THE PHOTOS & VIDEOS OR MEDIA (MOBILE) TAB TO VIEW.

The family of Marcella O. "Tootie" Weaver created this Life Tributes page to make it easy to share your memories.

Send flowers to the Weaver family.