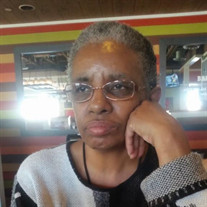 Louise Y. Stevenson, daughter of the late Reverend William H. Spinner and the late Marie Bessie (Dandridge) Spinner, was born October 21, 1946 in Harrisburg, Pennsylvania. She received her formal education in the Steelton-Highspire School District and in later years received her GED. Louise worked for AMP and Susquehanna Nursing Home as a second job because of the love she had for helping the elderly. Louise had it in her heart and made it her mission to take care of the elderly and that is exactly what she did whether in home care or nursing home, she was there. After years of dedication to her jobs, she decided to open a small child care center and worked part time at Hempt Bros. Louise received Christ in the early stages of her life. She was a former member of Mt. Calvary Baptist Church of Harrisburg, Pa for over 20 years. Then she dedicated her services to Harambee United Church of Christ where she was joined in holy matrimony with the love of her life, Willie Stevenson Jr., for 26 years, and became a Deaconess. They then became proud members of Bridge of Faith Church where her son is currently a Deacon as well. Louise, affectionately known as Mom, Aunt Weez, Wheezy, Grandma, or Nanny by family and friends, loved going to church, reading her bible and singing on the choir. She was known for her cooking, baking pies, cakes, cookies, you name it. She loved to dance, a stickler for cleanliness and was known for not biting her tongue for anybody. Louise lived a wonderful 75 years and was loved and cared for by her caregivers; her husband Willie/Casey, Robert, Tracy, Charles, grandchildren and great grandchildren. On Saturday, January 1, 2022, Louise Y. Stevenson peacefully transitioned from this earthly life to eternal life surrounded by her loved ones. In addition to her parents, she was preceded in death by her sisters, Clara L. Spinner, Gwendolyn A. Spinner, and her brother William H. Spinner Jr. Louise is survived by to celebrate her life and cherish memories: her husband, Willie Stevenson Jr.; two sons, Charles Willis (Latoya) and Robert Willis (Tracy); brother, James Spinner Sr. (Janice); Mary J. Stevenson; grandchildren, Chimere Willis, Tory Lewis, Zaire Willis (Dominique), Darell Porter, Dionte’ Willis, all of Harrisburg, PA, Dominique Brown of Silver Spring, MD, Jessica Holman, Kion Wright, Alexius McKune, Jachai McKune, Alex Edwards, Aigner Edwards; great-grandchildren, Corday Willis, Ricky Carroll Jr., Nyan Holman, Chymere Willis, Kelly Duffin-Willis, Kaion Willis, Zander Strange; great-great- grandchildren, Caiden Willis, Hassan Simmons, all of Harrisburg, PA; and a host of nieces, nephews, cousins and friends. FAMILY AND FRIENDS ARE ENCOURAGED TO CLICK ON THE SHARE A MEMORY TAB TO POST VIDEOS, SHARE MEMORIES, CONDOLENCES, REFLECTIONS OR SIMPLY YOUR NAME. CLICK ON THE PHOTOS & VIDEOS ON-LINE STREAMING OF SERVICE TAB OR MEDIA TAB (MOBILE) AND TRIBUTE WEBCAST TO VIEW SERVICE.

The family of Louise Y. Stevenson created this Life Tributes page to make it easy to share your memories.

Send flowers to the Stevenson family.