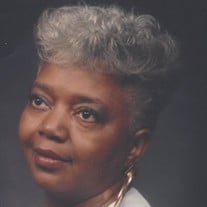 Lena was born Sunday, May 10, 1942, in Ozark, Alabama, daughter of the late Pearl Lee Daniels Ramsey. Affectionately known as “Jett” by family and friends, Lena’s church affiliation was with the St. Paul A.M.E. Church, Oberlin, PA, under the pastoral leadership of Rev. R. “Mim” Roberts Harvey. She received her formal education in the Swatara and Central Dauphin School Districts. Lena retired from the Commonwealth of PA, TRW, Inc., and she was also a hairdresser. She was a member of the Steelton Elks, Steelton Post 149 and enjoyed playing cards and crocheting. In Easton, PA, on Wednesday, October 3, 2018, at the age of seventy-six, Lena transitioned from this life joining in eternal life her mother and her beloved grandmother, Essie S. Williams. Lena’s life and legacy will be cherished in the hearts of her daughters, Rochelle A. Roberts of Hummelstown, PA, Annazette Roberts of Steelton, PA, Essie L. Ingram of Harrisburg, PA; her son, John R. Roberts IIII of Harrisburg; two granddaughters, Andrea Roberts of Harrisburg, Sheena Hicks of Hummelstown; three grandsons, Ruma Johnson of Harrisburg, Malcolm Hines of Maryland, William Ingram III of Delaware; eleven great-grandchildren, other relatives and friends.

The family of Mrs. Lena B. "Jett" Roberts created this Life Tributes page to make it easy to share your memories.

Send flowers to the Roberts family.