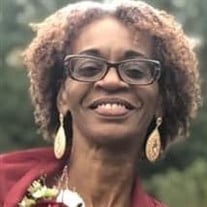 Lawanda Ann Jackson, daughter of Moses and Gloria Garnes Jackson, was born Sunday, February 5, 1961, in Harrisburg, PA. Lawanda was a graduate of Susquehanna Township High School, Class of 1979. A dedicated, hardworking woman, she was employed by the Commonwealth of PA for twelve years always willing to help and train other employees. She was united in Christian fellowship with Mt. Sinai A.M.E. Church. This loving, caring mother had so much love to give. Her house was often the gathering point for all the local neighborhood kids; and along with her children, she would look after them as they played and would babysit as well. A lover of the outdoors, some of Lawanda’s most enjoyable times were spent gardening, reading, journaling, cooking and especially spending time with her children and grandchildren. On Monday, June 10, 2019, at the age of fifty-eight, Lawanda passed from labor to reward as the result of health complications. She leaves to celebrate her life and forever cherish many special memories her mother, Gloria Jackson; father, Moses Jackson; father of children, Dwayne Gilchrist; her children, Tyrell Weaver, Tyron Jackson, Tyshae Jackson, Dasha Gilchrist, Dashaun Jackson, Richard Gilchrist, Janelle Gilchrist, Chardonay Gilchrist; her siblings, Jeffrey Garnes (Latitia), Sharon Saunders (Randolph), Albert Jackson, Anthony Jackson, Sheila Jackson, Moses Jackson Jr.; three grandchildren, one step-grandchild, other family members and friends.

The family of Lawanda Ann Jackson created this Life Tributes page to make it easy to share your memories.