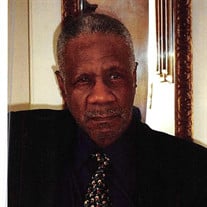 Larry Alexander Green, son of the late James R. Green and Helen A. Tatum Green, was born Saturday, May 28, 1949, in Harrisburg, PA. Larry was a spirited youngster, full of mischief, and loved by children and adults alike. Of all his siblings, he was the most precocious. Growing up in a Christian home, Larry accepted Christ at an early age and was baptized at The Greater Zion Missionary Baptist Church, Harrisburg. On April 18, 2010, Larry joined in fellowship with the Mount Calvary Church of God in Christ, Harrisburg. Larry was educated in the City of Harrisburg attending all uptown schools, elementary schools, Camp Curtin Junior High School and William Penn High School. Throughout his primary and secondary education, he was an exceptional athlete. He played football, basketball, baseball and swam. He worked for a time as a lifeguard at the Camp Curtin Branch of the YMCA. Although small in stature, his high school football athleticism was acknowledged, and he was scouted by colleges that offered him scholarships. He chose to matriculate at Shippensburg State College for a short period. After leaving Shippensburg, he worked at several jobs at the State Capitol and the Department of Corrections. He worked at the Homeland Center Retirement Community for many years as a security person. After years of dedicated service, he retired from Homeland. On Tuesday, December 21, 2021, Larry departed this life. He transitioned from physical and emotional pain and suffering. His residency was changed from his earthly home to a building not made with hands, eternal in Heaven. There, he joined his parents, James and Helen Green; siblings, Thomas O. Green, James M. Green, Barbara E. Green; and other loved ones who preceded him in death. Larry leaves to mourn his passing three sisters, Lola Brown, Geraldine Butler and Teresa Lewis; son, Larry O. Green; companion of his heart, Patricia Ann; stepson, Marty Martinez; five grandchildren, two great-grandchildren and a host of nieces, nephews, cousins and friends. FAMILY AND FRIENDS ARE ENCOURAGED TO CLICK ON THE SHARE A MEMORY TAB TO POST VIDEOS, SHARE MEMORIES, CONDOLENCES, REFLECTIONS OR SIMPLY YOUR NAME. CLICK ON THE PHOTOS & VIDEOS ON-LINE STREAMING OF SERVICE TAB OR MEDIA TAB (MOBILE) AND TRIBUTE WEBCAST TO VIEW SERVICE.

Larry Alexander Green, son of the late James R. Green and Helen A. Tatum Green, was born Saturday, May 28, 1949, in Harrisburg, PA. Larry was a spirited youngster, full of mischief, and loved by children and adults alike. Of all his siblings,... View Obituary & Service Information

The family of Larry Alexander Green created this Life Tributes page to make it easy to share your memories.

Send flowers to the Green family.