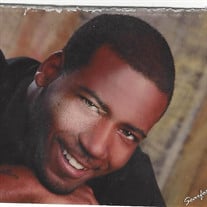 Kerry was born Monday, March 7, 1994, in Harrisburg, PA, son of Kerry M. Harris Sr. and Ericka Hall Leonard. Kerry graduated from Susquehanna Township High School, Class of 2013. He enjoyed sports, his Dallas Cowboys, playing X-Box, but most importantly, his relationships with people, especially his family. Kerry was loaned to us from God for twenty-three years. If measured in quantity, it was way too short. But when measured in quality, the quality of his life by far exceeded his years on this earth. It is the quality of his life that will keep him in our hearts beyond any time measurement. For every person he touched, he left his everlasting imprint behind. It wasn’t just a signature written, it was his imprint of his true self. “Kerry was Kerry;” it was the only person he could be and the only person he wanted to be. He stayed true to his self in all his relationships with everyone. Kerry was kind and considerate to everyone. He had a sense of honor and loyalty. His word was his bond never to be broken. Anyone that knew him knew that they could put their trust in him. He was well-mannered, as manners were imbedded in him from his upbringing, and to him it was natural. He was the positive in a world full of negativity. He chose to focus on being happy and making the people in his presence happy, whether it be by using his authentic trademark smile that could light up a dark sky or his natural, unscripted ability to make you laugh with his out-of-nowhere jokes, his facial expressions or reenacting crazy Facebook video stunts. He was the life-of-the-party, the cookout, the gathering of friends and family and the one-to-one with the special woman in his life. He was a people-person, and the people in his life and their relationships were most important to him. He cherished all his relationships, especially the special unconditional relationship he shared with his mother Ericka, his father Kerry Sr., and KiKi, his sister and best friend. Kerry was beyond his years in age for he knew and understood what was truly important and valuable in life, not the things a person has, the position or title a person places before or behind their names; it is the value of the relationships you have with others in your life that is truly important. It is through those relationships that Kerry M. Harris Jr. will live on as a bright light shining forever. On Tuesday, February 27, 2018, God in His Infinite Wisdom and Divine Love, called Kerry from time to eternity. He joins in eternal life his maternal grandmother, Phyllis Cade, maternal grandfather, James T. Williams Sr., and his paternal grandfather, Klaire Jones. Kerry leaves to cherish many precious and everlasting memories his father, Kerry M. Harris Sr. of Harrisburg, PA; his mother, Ericka Leonard of Sinking Spring, PA; his sisters, Kiara Harris of Sinking Spring, and Kerrimah Brown of Tucson, AZ; paternal grandmother, Antonia Matthews of Harrisburg; stepfather, Harvey Leonard Jr. of Sinking Spring; stepmother, Tammy Harris of Harrisburg; stepbrother, Lonnie Leonard of Philadelphia, PA; stepsisters, Sheliah Leonard of Philadelphia and Brittany Phillips of Harrisburg; aunts, Lisa Cade and Ruby Harris, both of Harrisburg, Yvette Williams of Charlotte, NC, Joy Williams and Angel Williams, both of Baltimore, MD; uncles, Vernell Harris Jr., Dennis Jones, Andre White, Dajann Rickards and James T. Williams Jr., all of Harrisburg; his beloved, dear and special friend, Deja Speaks of Harrisburg; as well as other family members and friends.

The family of Mr. Kerry M. Harris Jr. created this Life Tributes page to make it easy to share your memories.

Send flowers to the Harris family.