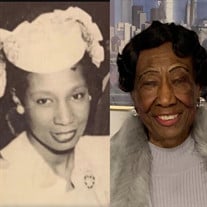 Kathryn Ellavaine Robinson was born on October 16, 1920 in Wrens, Georgia, to Ollie Mae Robinson and Willie Lee Robinson. Kathryn was the eldest of five children. She had three sisters and one brother. Today, she has one surviving sister. Her Dad Willie served in the Army and also fought in WWI. In 1938, Willie suffered a stroke so her Mom Ollie became an entrepreneur running her own soul food restaurant as well as doing domestic work for a nearby family. At seventeen years of age, Kathryn graduated from Paine College H.S. in Augusta, Georgia, and decided to migrate to Newark, New Jersey, where her aunt and uncle resided. Kathryn worked as a domestic and nanny until she met her husband James Yates a year later. They had their first daughter Helena on July 11, 1942, and a second daughter Carol on October 30, 1947. When Carol was eight months, Kathryn's husband was killed on his job in a freak accident at the steel mill. During this time, Kathryn and her family were living in Harlem, New York. She held jobs at Unique Art Factory, Federal Telephone & Radio and ITT Corp. where she did wiring and soldering for spaceships, etc. Shortly after her husband's death, Kathryn and her girls moved to the Bronx, New York. She traveled back and forth to Newark, New Jersey, from New York City for ten years until ITT furloughed employees. She then took in work as a domestic and nanny. It was during this time Kathryn started studying the Science of Mind and Metaphysics under the direction of Dr. Frederick J. Eikerenkoetter ~AKA~ Rev. Ike. She eventually went back to school to learn typing, shorthand and business skills. Since she was such a fast and accurate typist, she was hired full-time as a Secretary for the Presbyterian Church. During the year 1969, Kathryn took in her two granddaughters Sandra and Tonia whom she raised until they became adults. She was a proud member of the Order of the Eastern Star, and enjoyed being a member of the Happy Hour Social Club which organized banquets, dances and raised money for the community. Around 1985, she retired from the Presbyterian Church and went straight into another full-time position as Secretary for the United Palace Church. Rev. Ike eventually ordained Kathryn after she worked many years serving as a Practitioner. Kathryn worked in the church as both a Minister and Secretary until age eighty-three, and in May 2004, her granddaughters Sandra and Tonia moved her here to Harrisburg, Pennsylvania. Kathryn settled in at the Presbyterian Apartments where she soon became the Resident Pastor. She served as Resident Pastor for ten years. Kathryn turned one-hundred years old on October 16, 2020. She continued to spread positivity and give love to everyone around her including strangers. She will be extremely missed by all who had the privilege to be in her presence. On Friday, May 28, 2021, Kathryn transitioned from time to eternity. She leaves to mourn two children, Helena Smith of Wrens, Georgia, and Carol Ledford of Harrisburg, Pennsylvania; eight grandchildren, Sandra Gilbert (Terry), Tonia Kroboth (Robert), all of Harrisburg, Pennsylvania, Jamie Smith (Keysia) of Tampa, Florida, Dara Savage of Burlington, New Jersey, Ayana Ledford (Brad Beighle) of Pittsburgh, Pennsylvania, Makeeta Jones (Michael) of Burlington, New Jersey, Helena Smith of Landover Hills, Maryland, Clarissa Ledford of Marina del Rey, California; several great- and great-great-grandchildren; sister, Alene Walker of Wrens, Georgia; nieces, Joyce Buckle (Cartielyn) of Bronx, New York, Ardis Lawrence of East Point, Georgia, Cynthia Hall of College Park, Georgia; and a host of nieces, nephews, cousins, other relatives and friends. Interment will be in Georgia. FAMILY AND FRIENDS ARE ENCOURAGED TO CLICK ON THE SHARE A MEMORY TAB TO POST VIDEOS, SHARE MEMORIES, CONDOLENCES, REFLECTIONS OR SIMPLY YOUR NAME. CLICK ON THE PHOTOS & VIDEOS ON-LINE STREAMING OF SERVICE TAB OR MEDIA TAB (MOBILE) AND TRIBUTE WEBCAST TO VIEW SERVICE.

Kathryn Ellavaine Robinson was born on October 16, 1920 in Wrens, Georgia, to Ollie Mae Robinson and Willie Lee Robinson. Kathryn was the eldest of five children. She had three sisters and one brother. Today, she has one surviving sister. Her... View Obituary & Service Information

The family of Reverend Kathryn Ellavaine Robinson Yates created this Life Tributes page to make it easy to share your memories.

Send flowers to the Yates family.