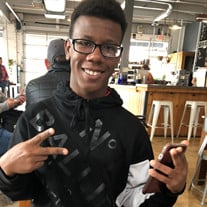 On December 14, 2018, Kasani Warren Womack, beloved son of Scott V. Womack and Patrea M. Womack, journeyed into Eternal Life. Kasani was born on October 19, 2002, in Harrisburg, PA. In January of 2007, at the age of four, Kasani visited the Womack’s for a supposedly one weekend visit. What was to be one visit turned into a lifelong relationship of full love. Kasani started calling Patrea and Scott, mom and dad from the moment he met them. This instant bond led to permanent adoption in August 2008 by the Womacks. Along with Scott and Patrea as parents, Kasani gained three older sisters, Mercedes, Dominique and T’Yanna. Kasani was educated in the Central Dauphin School District having attended KinderCare Day Care, South Side Elementary, Swatara Middle and Central Dauphin East High School. He was an intelligent, gregarious and charismatic young man who made friends everywhere he went. His personality was such that people always knew when Kasani was in the room even if he never said a word. Kasani was introduced to Christ at a young age at Faith Refuge Church in Harrisburg, PA. His Christian life continued to the Open Door Assembly where he was baptized in the name of Jesus Christ in July 2013 by his father, the senior pastor. He continued his walk with Christ at Christ Fellowship Tabernacle. Everyone who knew Kasani knew he was a gifted natural athlete who excelled on the football field. Kasani was literally “poetry in motion” on the field since the age of five when he started playing with the Paxton Panthers Youth Smurfs. Later, he played with CD East Youth Football and CD East High Freshmen where he was known for his ability to throw, run, hit fiercely and leap opponents in a single bound. He was “Superman” when on the field. Kasani truly excelled on defense as a Free Safety and during tackling drills, his teammates would often say, “I don’t want to go up against Kasani, he hits too hard.” Kasani was such a fast runner that he was asked why he liked defense more than offense because he could be a good wide receiver or running back. His response was, “I would rather hit than be hit.” However, Kasani soon proved his prowess on offense too as Quarterback and Running Back. On Special Teams, he was Kicker, Punter and Punt Returner. There are probably very few positions Kasani did not play when it came to football. He also played basketball with Paxton Youth Basketball, and eventually in 7th and 8th grades with Swatara/CD East Middle. Kasani had diverse interests, but one thing that never changed was his devotion and commitment to family, family, family. He LOVED participating in and organizing family activities with his immediate and extended families. Kasani was an excellent cook and baker. He enjoyed spending time with Samantha, hanging out with friends, going to movies, swimming, going to the beach, playing video games, working with Harrisburg Christian Performing Arts, helping people in church, watching TV and making sure his shoes matched his outfits. All who knew Kasani remember that smile, that laugh, his wonderful sense of humor, his ability to lift you up when you were down, his willingness to help, his big heart, his loyalty and his, “Because I’m Kasani” attitude. Kasani was one of a kind. He once told his parents, “There is no other Kasani in the school; so they don’t even say my last name when they call for me over the intercom. They just say, “Can you send Kasani down.” Latoya, thank you for giving him such a unique name that only he could carry off. Kasani was preceded in death by his grandfathers, Stanley H. Womack and Phillip J. Sears Sr. and his maternal great-grandmother, Elsie S. Moore. Kasani is survived by his parents, Scott and Patrea Womack; his sisters, Mercedes, Dominique and T`Yanna Womack; his paternal grandmother, Winona Womack, all of Harrisburg, PA; his maternal grandmother, Patricia Sears of Baltimore, MD; his uncles, Phillip Sears Jr. (Melvera) of York County, PA and Mathew Womack (Lilia) of Houston, TX; his aunt, Deborah Womack of London, England, mentor, Morgan Myers Murphy of Harrisburg, PA; special great-aunts, Brenda Sears and Joyce Pettaway, both of Baltimore, MD; multiple great-aunts, great-uncles, cousins and many, many friends and close friends. Kasani’s memory is also cherished by his biological family: mother, Latoya McClain of Harrisburg, PA; sisters, Kaysia Long of Harrisburg, PA, and Akira McClain of Washington, D.C.; brother, Seiyon Long, and grandmother, Ellen Hurtt, both of Harrisburg, PA.; uncles, Kenneth Randolph, Damien Hurtt, John Leonard; and aunt, LaKieya McClain. Submitted in Sorrow and Love, The Family

On December 14, 2018, Kasani Warren Womack, beloved son of Scott V. Womack and Patrea M. Womack, journeyed into Eternal Life. Kasani was born on October 19, 2002, in Harrisburg, PA. In January of 2007, at the age of four, Kasani visited the... View Obituary & Service Information

The family of Kasani Warren Womack created this Life Tributes page to make it easy to share your memories.