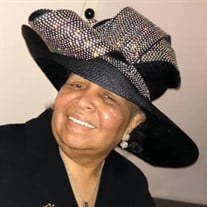 Mother Juanita Hutson was born Monday, October 6, 1941, in Harlem, New York, to Savannah Branch Jones and William Jones. The youngest of six children, she had four sisters, Ruth Jenkins, Ernestine Taylor, Sylvia Grierson, Lucille Jones, and a brother, William Jones. Mother Juanita Hutson attended Washington Irving High School where she graduated and pursued a Bachelor’s Degree in Business at Malcolm King College. Mother Juanita was one of the first members to attend Kelly Temple Church of God in Christ being part of the church’s groundbreaking. She was a faithful member and servant at Kelly Temple for over 50 years. Putting God’s gift of culinary skills to work, Mother Hutson assisted in Kelly Temple’s kitchen where she worked closely with Mother Wilson. One of her passions and highlights was cooking for the entire church in memory of her mom, Mother Savannah Branch Jones. On December 27, 1958, Mother Juanita and Charles Hutson Sr. were married by the late Bishop O. M. Kelly of Kelly Temple in his private home residence. Although Charles had but five cents to his name and Mother Juanita had no money, not even a pair of good shoes to wear (she actually had to borrow shoes from her older sister which weren’t even a correct fit), they remained married for over 62 years, until she was called home. In 1984, Mother Juanita gave her life to the Lord and became a faithful servant of God. Throughout the years, she prayed for many while encouraging others. She was always feeding people and making the best use of her God given gifts. In addition to her faithfulness to her church family, Mother Hutson was most known for her cooking and generous hospitality. As a long-time resident of Harlem, NY, Mother Hutson often-times fed the entire community and continued this service when she relocated to Harrisburg, PA. Whether it was feeding the local bus drivers, or even a total stranger, Mother Hutson had a selfless heart of true service which even extended into cyberspace! Through the years, Mother Hutson became tech-savvy; and from her iPhone, she would text family and friends “spiritual & encouraging vitamins” every single day. Beginning at sunrise and finishing just before mid-day, she would send the Daily Word to each and every person in her phone. Once Mother got your number, “Oh, boy,” she was adding you to her outreach list! Mother Hutson’s favorite scriptures were Psalm 46:10, “Be still and know that I am God,” II Chronicles 20:15, “Do not be afraid or discouraged, for the battle is not yours, but God’s,” and Psalm 18:30, “As for God, His way is perfect; The word of the Lord is proven; He is a shield to all who trust in Him.” These favorite scriptures Mother Hutson would always share with others. With her heart of gold, Mother Hutson would spend her last dime just to make sure everyone else was okay; saying “No worries, the Lord will take care of me. I am not worried about anything, just lean on Jesus and He will see me through.” Throughout her life, Mother Hutson was a woman of high morals, impeccable class and a hard worker. In the late 1960’s, Mother Hutson worked as a certified controller with the African American Institute for 5 years. Then following her dream to become a bookkeeper, she worked for H&R Block and later became the manager for over 15 years. With a passion for numbers and a love of doing taxes, Mother Hutson was old-school and wouldn’t do anyone’s taxes on the computer - she always did them by hand and with a coven copy. Following her time at H&R Block, Mother Hutson then worked with Channel 21 of Harrisburg, PA, where she retired in 2008. Growing up as a little girl, Juanita Hutson was a faithful member of the Kelly Temple Sunshine Band and encouraged our late Mother Helen McKinney to keep the Sunshine Band going by having bake sales to raise money for the band. As a devoted wife for 62 years, Mother Juanita Hutson loved her family more than anything and always believed, “In this house, we smile, hug, dance, play, laugh, love and pray daily. If you live a righteous life, you will see Jesus again.” Mother Hutson believed in family and having a strong bond with each other. Mother Juanita Hutson had a very classy style. As a woman of elegance, one would always see her with beautifully crafted hats, purses and other accessories, and she made sure each of her family members knew the same proper elegance. Whenever she entered her favorite stores, all the sales associates knew who Mother Juanita Hutson was and blessed her with outstanding, red-carpet treatment fit for a queen! Mother Juanita Hutson will certainly be missed! On Sunday, November 21st, 2021, at 12:40 a.m., Mother Juanita Hutson transitioned to be with the Lord. She was preceded in death by her sisters, Ruth, Ernestine, Lucille; her brother, William; and her son, Steven L. Hutson. Mother Juanita leaves to celebrate her life: her husband, Charles Hutson Sr.; sons, Elder Charles J. Hutson Jr., Michael C. Hutson and Todd A. Hutson; grandchildren, Jessica Kelly, Kristopher A. Hutson, Kristina A. Hutson, Yaseen A. Hutson; great-grandchildren, Nehemiah Kelly and Roman Denise Hutson; one sister, Sylvia Grierson; nieces, Tracey Moore and Dr. Sharon Taylor Holliman; nephews, Dudley Grierson Jr. and Julius (JC) Taylor; Godchildren, Malene (Curtis) Lawrence and Malik Hawkins; several great-nieces, great-nephews and over 500 cousins. Mother Juanita Hutson, you will be missed, but never forgotten. As she sings to God be the Glory for the things, He has done... FAMILY AND FRIENDS ARE ENCOURAGED TO CLICK ON THE SHARE A MEMORY TAB TO POST VIDEOS, SHARE MEMORIES, CONDOLENCES, REFLECTIONS OR SIMPLY YOUR NAME. CLICK ON THE PHOTOS & VIDEOS ON-LINE STREAMING OF SERVICE TAB OR MEDIA TAB (MOBILE) AND TRIBUTE WEBCAST TO VIEW SERVICE.

The family of Mother Juanita Hutson created this Life Tributes page to make it easy to share your memories.

Send flowers to the Hutson family.