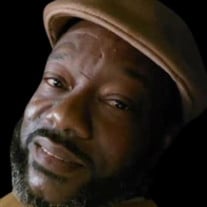 John E. Williamson III, known to some as “PeeWee,” was born Saturday, October 2, 1976, in Harrisburg, PA, to Annie Lee Monts-Williamson and John E. Williamson Jr. John grew up as an only child while receiving his formal education and playing sports prior to graduating from the Susquehanna Township High School in 1995. In 1993, while with his cousin in Steelton, PA, John met the love-of-his-life and best friend, Crescencia Pastora Cruz Baumgartner; a love story that continued to grow stronger each day. Then, one beautiful afternoon on the seventh day of September, 2013, John decided to say, “I do” and form the perfect union with his best friend while standing in the Rose Garden at Harrisburg Area Community College (HACC). John had been employed by the City of Harrisburg as a Park Ranger from 1996 up until 2011 when he retired as the Chief Ranger. At the time of his passing, he had been employed with Harrisburg Area Community College as a Public Safety & Security Officer. John was one in a million, and he touched the hearts of everyone he met. On Thursday, November 4, 2021, at 12:25 p.m., God dispatched his escort to carry him home. John was preceded in death by his mother, Annie Lee Davis. He leaves to cherish his ever-so-loving memories his wife, Crescencia Pastora Cruz-Williamson; two sons, John E. Williamson IV and Siyeeir Barton; one daughter, Pamela Baumgartner; granddaughter, Sammarie Childs; grandmother, Mrs. Josie B. Williamson; father, John E. Williamson Jr.; two uncles, Tony Williamson, Donnie R. Williamson; and a big host of family and friends that he was so grateful to have had. Submitted with Everlasting Love FAMILY AND FRIENDS ARE ENCOURAGED TO CLICK ON THE SHARE A MEMORY TAB TO POST VIDEOS, SHARE MEMORIES, CONDOLENCES, REFLECTIONS OR SIMPLY YOUR NAME. CLICK ON THE PHOTOS & VIDEOS ON-LINE STREAMING OF SERVICE TAB OR MEDIA TAB (MOBILE) AND TRIBUTE WEBCAST TO VIEW SERVICE.

John E. Williamson III, known to some as &#8220;PeeWee,&#8221; was born Saturday, October 2, 1976, in Harrisburg, PA, to Annie Lee Monts-Williamson and John E. Williamson Jr. John grew up as an only child while receiving his formal education... View Obituary & Service Information

The family of John E. Williamson III created this Life Tributes page to make it easy to share your memories.

John E. Williamson III, known to some as “PeeWee,” was born Saturday,...

Send flowers to the Williamson family.