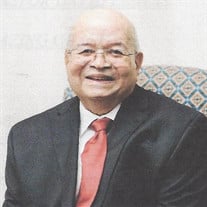 James Thomas Webster was born in Gainesville, Florida, on August 12, 1927, to the late Wilton Thomas and Emer Webster. At the age of nineteen, James joined the Armed Forces on March 5, 1946, following the end of World War II as Private First Class, and was stationed in Alaska. Due to an injury sustained during his service, James was Honorably Discharged on October 23, 1947. He was awarded the World War II Victory Medal for time served. Following his discharge, James returned to Gainesville where he met Thelma Ann Duncan, and they were married shortly thereafter. They were blessed to start a family there, but decided to move to Atlantic City, New Jersey, in 1949, and then Philadelphia, Pennsylvania. In that time, they raised four boys and three girls. James was a tireless worker who would work two and sometimes three jobs to meet the needs of his growing family. He never complained or forsook his responsibilities of such an arduous task of raising a large family in the challenging streets of Philadelphia. Sadly, Thelma passed away in the late summer of 1984. At the age of sixty-six, James relocated to Harrisburg, Pennsylvania, to be closer to family members, since most had moved out of Philadelphia to pursue professional careers. After a few years on his own, he met Mary Ella Cowan, known as Mae Bryant by many, who was his downstairs neighbor in the apartment complex where they both resided. Before long, the family was informed of their intended nuptials, and on December 18, 1997, they became one in holy matrimony. From that day until this, they were inseparable, as they lived out the vows of their union. James Thomas Webster lived a full life, a fulfilling life, a giving life, a godly life. He became a member of Word of Grace Ministries in Harrisburg on March 11, 2001. He was a faithful attendee until his recent illness, a steadfast reader of the Bible and daily devotions, and an avid viewer of selected spiritual presentations on television. His other two quiet passions were watching old western movies and the Philadelphia Eagles. James Thomas Webster was a provider, a hard worker, a gentle soul, and a man of few words whose impact on family and friends was dwarfed only by the size of his heart. When asked to explain who James was as a man, his wife Mary simply stated, “He was one of the kindest, patient and loving individuals I have ever met.” So don’t cry for James…for as his youngest great-grandson recently stated, “Jesus is doing flips because grand pop is coming.” On Thursday, July 12, 2018, James transitioned from this life into eternal life. He was preceded in passing by his first wife Thelma, and son Blaine. Surviving to carry on his legacy of gentleness, kindness and a loving spirit includes, but is not limited to, his wife Mary; his sons, Jimmy, Rene (Jackie) and Kenny (Eula); daughters, Beverly (Jerry), Toni and Traci; stepdaughters, Tonette Bryant and Shareese Cowan; twelve grandchildren, ten great-grandchildren, other family members and friends. Lovingly and Respectfully Submitted, The Family of James Thomas Webster

James Thomas Webster was born in Gainesville, Florida, on August 12, 1927, to the late Wilton Thomas and Emer Webster. At the age of nineteen, James joined the Armed Forces on March 5, 1946, following the end of World War II as Private First... View Obituary & Service Information

The family of Mr. James Thomas Webster created this Life Tributes page to make it easy to share your memories.

James Thomas Webster was born in Gainesville, Florida, on August...

Send flowers to the Webster family.