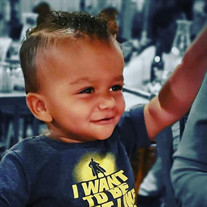 Isaiah Noor Scott, son of Troy Wesley Scott Jr. and Munira Nurdin Hassanali, was born Thursday, December 14, 2017, in Harrisburg, PA. Isaiah entered heaven’s gates suddenly and unexpectedly on Saturday, February 8, 2020. Isaiah attended United Baptist Church and Mickey Mouse Clubhouse. He was enrolled at Tiny Learners Daycare. Even though Isaiah’s time with us was brief, he brought so much joy and happiness to those who met him. He was an avid builder with mega blocks creating the biggest and best tower, only to knock it over. He was quickly becoming one of our times greatest toddler artists with his love of crayons and markers. Wise beyond his years, Isaiah knew his colors, shapes and body parts. His most important letter in the alphabet was the letter “H” for his best friend Harley. He prided himself in being a professional eater, and he loved watching Paw Patrol, Mickey Mouse, Moana, Frozen and Coco. Most of all, Isaiah loved being the center of attention. He was the brightest light in any room, and with that light, he was able to bring out the very best in everyone. Isaiah is survived by his parents, Troy Scott Jr. and Munira Hassanali; sister, Amira Scott; brother, Xavier Scott; grandparents, Tina and Larondo Tucker, Troy and Janet Scott, Susan and Nurdin Hassanali, Brian and Sharon Stalker. Isaiah also leaves a shining star in the lives of his special aunt, April Cutshall; godmothers, Alicia Wagner, Heather Barner; paternal aunts, Tanisha Scott, Britney Davis (Corey), Tanae Scott; maternal aunt, Sherry Hassanali; paternal uncle, Tyler Scott; maternal uncles, Mustafa Hassanali (Arwa), Mustafa Patwa (Scheherazarde), Hussein Hassanali; other relatives, extended family and finally his best friend and right hand partner-in-crime, Harley Savannah Quinn. “…the Lord gave, and the Lord hath taken away; blessed be the name of the Lord.” Job 1:21 Submitted in Love and Sorrow, Isaiah’s Family In lieu of flowers, the family requests memorial donations be made in Isaiah's name to Tiny Learners Daycare, 5013 E. Trindle Road, Mechanicsburg, PA 17050.

The family of Master Isaiah Noor Scott created this Life Tributes page to make it easy to share your memories.