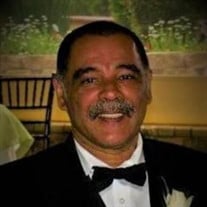 The soul of Humberto “Junior” Aviles departed from this earth to join his Heavenly Father on January 7, 2021 at the age of 70. His final hours were spent with his family, being doted upon by his adoring wife and children. Junior was born in Vega Alta, Puerto Rico, on December 6, 1950. At an early age, he was a very capable and independent person. In his youth, he moved away from his island to the Bronx, New York, where he eventually met his life partner, Cynthia, whom he affectionately referred to as “Pepsi.” Junior spent much of his time as a young man creating memories with his siblings and extended family of Pepsi’s. Junior and Pepsi relocated their family to Harrisburg, Pennsylvania in 1986, where they have resided and built their life together. He was a tenderhearted father to his young children, blessing them with nothing but pleasant memories of him from their childhood. He worked hard as a landscaper for most of his life, but always made time to take a multitude of family trips, frequently driving Pepsi and the kids back to New York or down to Florida for vacations. Junior was an avid New York Giants football fan, which he passed down to his sons and grandsons. One of his greatest pastimes was to come together to cheer on their favorite team, decked out in NY gear. He also very much enjoyed old western films and later in life would spend a lot of time retelling the adventures he’d watched to his grandchildren. Junior was a quiet, easy-going man who lived life day by day without stress. His foremost joys undoubtedly came from his grandchildren. With each new child brought into his life, he became visibly more passionate, more joyful, more abundant. Shortly before his passing, Junior learned that he had several more grandchildren from his eldest son, and he had reached out to them in order to bring the families together. Junior was preceded in death by his sons, Aaron and Humberto Jr. Aviles; his mother, Flora Aviles; sister, Rosa Claudio; and brother, Felix Claudio, Jr. Junior is survived by his wife, Cynthia Pardo; son, Eli Olivera; daughter, Raquel Aviles; sons and their wives, Uriah and Tiara Aviles and Isaiah and Tanya Aviles; brothers, Domingo Claudio Aviles, Ramon Claudio Aviles, and Carlos Aviles; sisters, Clara Claudio, and Ida Claudio; and sister-in-law, Tracy Pardo; his grandchildren, Matthias Maxwell, Ilijah Maxwell, Eurya Aviles, Zemira Aviles, Calie Aviles, Cora Aviles; his grandchildren whom he wished to be able to meet, Gisela Aviles, Stephanie Aviles, Tania Aviles, and Rosie Aviles; a great-granddaughter, Sariyah Rebolledo; as well as several dear nieces and nephews. Junior will be sorely missed by his family, as his passing was so devastatingly unexpected. Pepsi recalls him spending his Sundays “at church” as he had adopted a routine of observing televised services. It is the belief that Junior is now at peace, and with God, where we may one day join them. We know God will pull our family through this unforeseen sorrow. FAMILY AND FRIENDS ARE ENCOURAGED TO CLICK ON THE SHARE A MEMORY TAB TO POST VIDEOS, SHARE MEMORIES, CONDOLENCES, REFLECTIONS OR SIMPLY YOUR NAME. CLICK ON THE PHOTOS & VIDEOS ON-LINE STREAMING OF SERVICE TAB OR MEDIA TAB (MOBILE) AND TRIBUTE WEBCAST TO VIEW.

The soul of Humberto &#8220;Junior&#8221; Aviles departed from this earth to join his Heavenly Father on January 7, 2021 at the age of 70. His final hours were spent with his family, being doted upon by his adoring wife and children. Junior... View Obituary & Service Information

The family of Humberto Aviles "Junior" created this Life Tributes page to make it easy to share your memories.

The soul of Humberto “Junior” Aviles departed from this earth...

Send flowers to the "Junior" family.