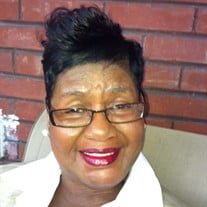 The Obituary "Amazing Grace, how sweet the sound that saved a wretch like me I once was lost, but now am found t'was blind but now I see." Gwendolyn Marie Powell was born Sunday, March 4, 1945, in Harrisburg, PA, to the union of the late James Ronald and Betty (Fleming) Powell. Gwennie, as she was affectionately called by her friends and family, received her formal education in the Harrisburg Public School System. In her leisure, she enjoyed going to the casino and playing the lottery in which both she was very lucky. However, she loved to have fun and always was the life-of-the-party. All her life she was a dancing machine. Not many could top her. She could put a mean “slop” down on the dance floor that no one could clean up. Gwen was also an avid Michael Jordan fan and a M.C. Hammer fan. She was a very strong woman with many skills; however, being the eldest of six, she quickly developed the skills and passion for taking care of others. She loved to cook and take care of her brothers and even recently you could not stop her from waiting on Gary, Roland, Perk or Jeff hand and foot, even while they harassed her with a little back-talk. During her employment tenure with the Harrisburg School District, Gwennie showed concern for the well-being of the children she served while working at the Lincoln school. She began to take them home, raise them as her own and would even tell the parents, “Not Today, I Got Them!” Gwennie retired from the Pinnacle Health System January, 2015, and for twenty-seven and one half years as an employee she followed the care of anyone she knew who entered the hospital. Having accepted the Lord Jesus Christ as her personal Savior, Gwennie was a member of Bethel AME Church in Harrisburg, PA. She was also affiliated with the Harrisburg First Church of the Brethren where she would attend bible study and serve at the food bank. If there was anyone who could not make it to the food bank, she would personally pack up and deliver. On Sunday, June 3, 2018 the Lord dispatched an angel and lead Gwendolyn from labor to reward to the place “HE” has prepared for her. In addition to her parents, she was preceded in death by one brother, Roderick “Earth Dog” Powell, and two sisters, Trudy Ann Powell-Cousins and Donna Lee Powell. She leaves to celebrate her life and cherish many precious memories three daughters, Kimberly L. Revely, Raquel D. Powell, Adrienne L. Wilson (Densin); one grandson, JaBriel A. Powell; one granddaughter, Kristian C. Mahone; one great grandson, Javon A. Malone; and two great granddaughters, Jaliyah M. Powell and Anai'Ja M. Clark. Her life will also be lovingly remembered by her two brothers, James “Perky” and Gary “Goose” Powell (Rachel), all of Harrisburg, PA; special cousin like a brother, Jeffery L. Fleming of Wyoming-Camden, DE; special nephew like a son, Michael B. Cousins, and special cousin like a daughter Cherie L. Dudley of Harrisburg, PA along with a host of other relatives and friends who loved her deeply. We take comfort in knowing she is with God … Lovingly Submitted by Gwendolyn’s Family

The Obituary "Amazing Grace, how sweet the sound that saved a wretch like me I once was lost, but now am found t'was blind but now I see." Gwendolyn Marie Powell was born Sunday, March 4, 1945, in Harrisburg, PA, to the union of the late James... View Obituary & Service Information

The family of Ms. Gwendolyn Marie Powell created this Life Tributes page to make it easy to share your memories.

The Obituary
&quot;Amazing Grace, how sweet the sound that saved a...

Send flowers to the Powell family.