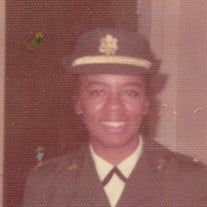 Gwendolyn was born September 22, 1950, in Philadelphia, PA, daughter of the late Curtis Grimes and the late Dorcille Haynes Grimes. Gwendolyn earned her Bachelor&#8217;s Degree at the University of Illinois and her Master&#8217;s Degree at... View Obituary & Service Information

The family of Major Gwendolyn A. Grimes-Ford created this Life Tributes page to make it easy to share your memories.

Send flowers to the Grimes-Ford family.