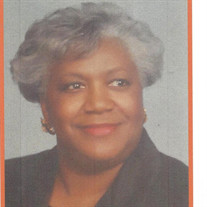 Georgianne Manning, daughter of the late Richard Wallace and the late Marie Johnson Wallace, was born September 4, 1940 in Chester County, South Carolina. Upon her family relocating to Steelton, PA, Georgianne was educated in the Steelton-Highspire School District. After graduation “Georgi” as she was known by family and friends, became the woman of her father’s house at 17 years of age after her mother passed onto glory. She attended to the house, cooking her father’s meals and caring for her brothers and sisters. Georgi grew up as a member of Beulah Baptist Church located in Steelton, PA. She started working and soon united in holy matrimony to the late Vernon Manning. Their union was blessed with five children Crystal, Glenn, Parris, Rome and Rose. Georgi started her own family relocating to Harrisburg, PA and worked for Hershey Chocolate Factory in Hershey, PA for many years and then later retiring from AMP Inc. in Harrisburg, PA. Georgi relocated to Tampa, FL and started a position with IBM Corporation and then was employed by the Celetox Corporation until her retirement. She became a long time member of True Faith Inspirational Baptist Church and faithfully served with the Usher Ministries. Georgi had a great love for God, her family and life. She was a humble spirit with a kind heart. She was the epitome of elegance, grace and beauty. Georgie was a great wife, a great mother and a true friend forever. Just to simplify it, she was a gentle loving soul. Georgi enjoyed hobbies such as cooking, decorating and watching Saturday morning cowboy movies. She was an avid reader and loved to entertain. She was funny and had a passion for traveling. God graced Georgi with her 79th birthday on September 4, 2019. On September 30, 2019, Georgi RSVP’d the invitation sent to her by God. She is home reunited with her parents, her two sisters, Rose Marie Wallace Steelton, PA and Jacqueline Renee Green (Leon) Harrisburg, PA. Her brother Willie James “Chuck” Wallace predeceased Georgi in sunset July 27, 2019. Georgi will be very much missed by her four sisters and two brothers: Shirley McKenion and Bertha Johnson both of Tampa, FL, Louise Cook of Chester, SC, Rachel Powell (Gary) and Jerry Wallace (Dale) both of Harrisburg, PA and Dennis Wallace of Scranton, PA. Her children: Crystal Lowery (Harold) of Harrisburg, PA, Rose Manning (Jeffrey) and Parris Manning (Kim) both of Tampa, FL, Glenn Wallace (Lorraine) of Nassua, New Hampshire and Rome Manning of Joplin, Missouri. Georgi has many grandchildren and great grandchildren and loved them all. Other children Georgi helped raise: Rachel, Jamie, Nakia, Brant, Jazz, Brandi and Raven. There are numerous brothers and sisters-in-law, cousins, nieces, nephews and a host of long time friends from several states including York, PA and Harrisburg, PA and other states throughout the country and as far as Canada. Georgianne was loved and adored by many throughout her life and will be greatly missed, so when you remember Georgianne Manning just look up and smile.

Georgianne Manning, daughter of the late Richard Wallace and the late Marie Johnson Wallace, was born September 4, 1940 in Chester County, South Carolina. Upon her family relocating to Steelton, PA, Georgianne was educated in the Steelton-Highspire... View Obituary & Service Information

The family of Ms. Georgianne Manning created this Life Tributes page to make it easy to share your memories.

Georgianne Manning, daughter of the late Richard Wallace and
the...

Send flowers to the Manning family.