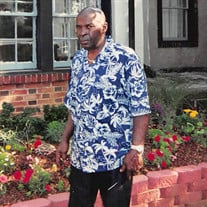 "The Man, The Nurturer, The Warrior" The world lost a man of honor, valor, and courage Friday, April 30, 2021. Mr. Gene Rice was born September 6, 1942, to Reverend James and Mrs. Lettice Rice, number five of seven children, in Mauvilla, Alabama. He accepted Christ and began his spiritual journey at an early age at Mt. Olive Baptist Church of Mauvilla. He was a skilled football player for Mattie T. Blount High School and a graduate of Cedar Grove Academy. As a young lad, his calling was made evident. His adventurous and free spirited being manifested itself through his love of working with his hands. Gene was an innate craftsman who could be found repairing automobiles, reconstructing homes, and tinkering with broken objects. His dexterous purpose continued into adulthood. Army Specialist (E-4) Gene Rice was a Wheeled Vehicle Mechanic in the United States Army during the Vietnam War and a mechanic for the Prichard Police Department following his military service. But one of his heart's passions was being on the road. He was an interstate trucker for over 30 years, largely as an owner operator and a smooth operator at that. His fellow peers gave him the moniker, "Mean Gene," due to his skilled and adept driving abilities; he could certainly handle the road. While his God-given trade was a passion, his family was his heart in its purest form. His wife and soulmate, Charlotte Rice, for 33 years was his prized treasure, and his daughters were his angels. His favorite pastimes were all about family: holidays spent with his wife, children, and grandchildren; trips to his native Mauvilla, Alabama to visit family; long talks with his siblings; and dancing to any tune with his loved ones. Along with being a man's man and family man, he was a man of great, benevolent character. Kindness and he were synonymous. He would help anyone. The person did not matter; he only saw the need. As a community pillar, he was often seen helping a neighbor with a task; due to his southern gentility, he was known for assisting passing strangers; and because of his spiritual upbringing, he was viewed as a man of compassion. His loving spirit and his will to fight to see another day will be deeply missed and remembered. In glory, he has been welcomed home by his parents, Reverend James and Lettice Rice; his sisters, Jamesetta Mose, Janice Sims, and Carolyn Davis; his brothers, Clyde Rice and Edmond Rice. On earth, he leaves his legacy to his wife Charlotte Rice; his five daughters, Sabrina Williams, Katrina Williams, Genelle Rice, Geneira Rice, and Geneia (Walter) Rice-Parker; six grandchildren, Zakyah Williams, Saige Hawkins, Jazenai Parker, Walter Parker Jr., Loyalty Parker, and Elijah Williams; his sister, Shirley (Quinton) Ross; two sisters-in-law, Velma Rice and Veronica Rice; two brothers-in-law, David Davis and Renard Mose.; two sons chosen with love, Jordan Johnson and Maurice Baxter, and a host of nieces, nephews, other relatives, and friends. FAMILY AND FRIENDS ARE ENCOURAGED TO CLICK ON THE SHARE A MEMORY TAB TO POST VIDEOS, SHARE MEMORIES, CONDOLENCES, REFLECTIONS OR SIMPLY YOUR NAME. CLICK ON THE PHOTOS & VIDEOS ON-LINE STREAMING OF SERVICE TAB OR MEDIA TAB (MOBILE) AND TRIBUTE WEBCAST TO VIEW SERVICE.

The family of Gene Rice created this Life Tributes page to make it easy to share your memories.

&quot;The Man, The Nurturer, The Warrior&quot;

Send flowers to the Rice family.