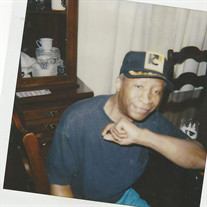 "He Struggles No More” Freddie was born Friday, August 21, 1936, in Bamberg County, South Carolina, son of the late Samuel Williams and Ruth (Romeo) Williams. Freddie departed this life on Thursday, May 31, 2018, at eighty-one years of age, while at the Colonial Park Care Center, Harrisburg, PA. Along with his parents, Freddie was also preceded in death by his son, Freddie Jay; his stepdaughter, Darlene Duffin; granddaughter, Brielle Griffin; brother, Louis Williams; and sister, Barbara Williams. Freddie was a graduate of William Penn High School (The Tigers), Class of 1955. After graduation, he enlisted in the United States Air Force serving four years stationed in Tuli Greenland. Upon being honorably discharged, Freddie secured employment with the Department of State in Washington, DC, as a communications technician. When Freddie returned to Harrisburg, he held various jobs as a truck driver on several military bases as well as with the Commonwealth of PA. Freddie was always quite, athletic and very strong (for a small guy). He participated in football, track and field for the William Penn Tigers. His favorite sport was football and his favorite team was the Washington Redskins “Go Skins”. He enjoyed watching television, especially the “Three Stooges” and “Sanford and Son.” Freddie lived with a stroke for over twenty-five years. During that time, he lived with each one of his sisters until his declining health. Freddie is survived by his daughter, Janet Williams of Harrisburg; stepchildren, Kevin Duffin, Lionell Duffin and Vyoma Duffin, all of Harrisburg; his grandchildren, Lakeisha Jefferies of Philadelphia, PA, Bianca Jones, Jaquon Jones, Robert Sheridan, Kerystn Watson, Jaquay Williams, Freddie Jay Williams, Todd Moody, all of Harrisburg; his sisters, Doris Stewart of Landover, Maryland, Carol (Williams)Thrasher (Marvin), Mary Williams, all of Harrisburg; a special niece, Teri Douglas of Landover, Maryland; and a host of other relatives and friends. A heartfelt thank-you to Homeland Hospice (Kay) Lovingly Submitted, The Family

"He Struggles No More&#8221; Freddie was born Friday, August 21, 1936, in Bamberg County, South Carolina, son of the late Samuel Williams and Ruth (Romeo) Williams. Freddie departed this life on Thursday, May 31, 2018, at eighty-one years of... View Obituary & Service Information

The family of Mr. Freddie Williams created this Life Tributes page to make it easy to share your memories.