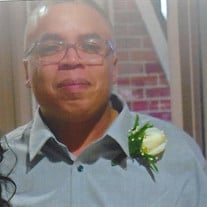 Eric “Topcat” Leach, a loving and devoted husband, father and resident of Steelton, PA, lost his life unexpectedly on Wednesday, November 21, 2018, at the age of fifty-six. Eric was born Wednesday, November 22, 1961, in Harrisburg, PA, son of Frances Wright Leach and the late Allen Leach Jr. Eric graduated from Bethel High School, Hampton, VA, and, thereafter, served honorably in the United States Army and the PA National Guard. Eric was a proud veteran, and was most recently employed at the Defense Logistics Agency in New Cumberland, PA, from 2011 to 2018. In 1983, Eric met the love of his life Melvena, and they united in marriage on November 22, 1985. Eric and Melvena’s love story is one that can only be imagined, pure and unique. During their thirty-five years together, they had thirteen children. Eric enjoyed watching all sports and was an avid Minnesota Vikings fan. He often spent time at the casino, loved to dance, was known by the neighborhood kids as “Ice cream” for his famous hook-shot, and being a numbers guy, Eric never forgot a birthday. However, foremost and most importantly, he deeply loved and cared for his wife, children and grandchildren, and worked tirelessly to provide for them. His most special times were spent with his family. If you met Eric frowning, you left Eric laughing because he could always tell a good joke. Eric is survived and deeply missed by his wife of thirty-five years, Melvena Leach of Steelton, PA; his children, Erica (Tracey) Millberry-Strickland of Harrisburg, PA, Endia (Jaren) Noon of Lancaster, PA, Elisa Leach of Harrisburg, PA, Eric Leach of Middletown, PA, Esenc and E`Andre Leach, both of Harrisburg, PA, Ember, Eshly, Eliza, Elana, Ericsson, Eyverson and Enlys Leach, all of Steelton, PA; his mother, Frances Leach, brother, Allen (Kimberly) Leach II, all of Hampton, VA; sister, Marcella Ray of Charlotte, NC; eighteen grandchildren; and a host of extended family and friends. Eric was preceded in death by his father, Allen Leach Jr., and one brother, Marques Leach. This husband, father, grandfather, son, brother, uncle, nephew, cousin and friend will always be loved and never forgotten. Just as he worked tirelessly for them, his wife and children vow to do the same to honor his legacy.

The family of Mr. Eric Leach created this Life Tributes page to make it easy to share your memories.

Eric “Topcat” Leach, a loving and devoted husband, father and...

Send flowers to the Leach family.