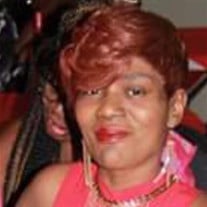 Diania Moore, affectionately known as “Redd” by family and friends, was born Tuesday, November 10, 1970, in Harrisburg, Pennsylvania, daughter of Sara Clayton and the late Richard “Dick” Brickus. Along with her father, she was also preceded in death by her maternal grandmother, Christene Ingram; paternal grandmother, Ruby Brickus; sister, Nikki Moore; two aunts, Diane Smith and Kelly Brickus; cousin, Earl Moore Jr.; and her best friend, Laila “Peaches” Martin. Redd graduated from the former William Penn High School, Class of 1988. She had a big heart and a strong personality. If you knew her, you knew her home was your home. Redd had unconditional love for her family and friends. She kept it real, no secrets, and took no mess. She would tell you like it was and was always one phone call away for her family. She enjoyed spending time with her grandchildren, watching “Law and Order” and was a diehard Steelers Fan! Redd couldn’t go a day without talking to her favorite cousin Peedee. Redd was known around the neighborhood as “Mama Redd.” Motherhood was second nature to her as she started at the early age of seventeen taking care of her siblings. From there forward any child that crossed her doorstep was her responsibility. Redd was notoriously known for her loud mouth and smart sense-of-humor. She walked it like she talked it, and could back it up. At the age of forty-seven, in Harrisburg, PA, on Monday, June 4, 2018, Redd departed this life leaving to celebrate her life her mother, Sara Clayton; six children, Razawn “RaRa”, Shaquille “Abe” and Aaliyah Moore, Jalonnie Robinson, Jadda and Jaheem Blackstone; ten siblings, Tara, Jamie, Richard and Kirby Brickus, Kerion Moore, Yarnell, Syreeta, Gary Jr., Chevelle and Gaddiel Clayton; four grandchildren, Nazire, Cashawn, Jahzire and Shaquille Moore Jr.; longtime partner of seventeen years, Darnell “Butch” Blackstone; best friend, Carla Porter; her “playmate,” aunt/sister Shurone “Renee” Moore; two daughters-in-law, Raquel Salinas and Shanae Mosley; devoted cousin, Wonder “Wanda” Morrison; five aunts, two uncles, eleven nieces, sixteen nephews, two great-nephews, three great-nieces; and a host of cousins, extended family and friends. Lovingly Submitted by Diania’s Family

Diania Moore, affectionately known as &#8220;Redd&#8221; by family and friends, was born Tuesday, November 10, 1970, in Harrisburg, Pennsylvania, daughter of Sara Clayton and the late Richard &#8220;Dick&#8221; Brickus. Along with her father,... View Obituary & Service Information

The family of Ms. Diania "Redd" Moore created this Life Tributes page to make it easy to share your memories.

Diania Moore, affectionately known as “Redd” by family and friends,...

Send flowers to the Moore family.