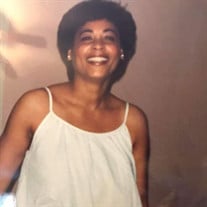 Daisy Ruth Nesmith Ames, daughter of Peter James and Daisy Belle Nesmith, the eldest daughter of six children, was born Sunday, March 14, 1943, in Nesmith, South Carolina. Daisy, also known as Ruth to her family, left Nesmith, South Carolina, to attend Allen University in Columbia, SC, where she met her future husband Robert. After graduating with a Degree in Education, she moved to New York City, where she married Robert Ames. Daisy and Robert shared a marital union of fifty-seven years. Daisy had a passion for learning, traveling and exposure to new information. She would take her children, Sunada and Ayana, to museums and famous landmarks throughout their childhood. Daisy was a devoted born-again Christian who was very active in her church for many years helping with the Children’s Ministry and other functions throughout the church. Her drive and dedication to learning earned her a Master’s Degree from Brooklyn College. Once Daisy retired from the New York State Department of Labor, she enjoyed traveling with her husband to various landmarks throughout the United States and enjoying life. She frequently took pictures of their adventures and left behind memory books that her children and grandchildren have enjoyed throughout the years. Daisy was a loving wife, mother, grandmother, sister and friend. She passed away peacefully on Saturday, March 26, 2022, in Harrisburg, PA. She was preceded in death by her father, Peter Nesmith; mother, Daisy Belle Nesmith (Lou); brothers, James Bo Nesmith, Peter James Nesmith and Theodore Nesmith. Daisy leaves to honor and celebrate her legacy: her loving husband, Robert; her children, Sunada and Ayana; sisters, Verlean McGill and Elizabeth Bynum; sister-in-law, Daphney Nesmith; son-in-law, Michael Roberts; grandchildren, Aidan, Joshua, Ian and Genesis; as well as a host of nieces, nephews, other relatives and friends. Daisy loved fiercely, deeply and moved with a strength and determination that was unmatched. We take comfort in knowing that she is now restored and at peace. FAMILY AND FRIENDS ARE ENCOURAGED TO CLICK ON THE SHARE A MEMORY TAB TO POST VIDEOS, SHARE MEMORIES, CONDOLENCES, REFLECTIONS OR SIMPLY YOUR NAME.

The family of Daisy Ruth Nesmith Ames created this Life Tributes page to make it easy to share your memories.

Send flowers to the Ames family.