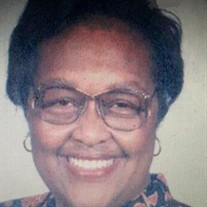 Clorease was born November 10, 1938, in Indian Woods, North Carolina, daughter of the late George W. Lee and Mary Smallwood Lee. George and Mary were farmers, and Clorease grew up on the farm where her parents taught her all aspects of growing food and caring for livestock. Later, the family relocated to Steelton, PA, and upon finishing high school, she attended Norfolk State College, Norfolk, VA, where she enjoyed playing guard on the women’s basketball team. In Steelton, she met and married Sylvester Slade. Through their union, they had their first child, John. They later moved to Philadelphia, PA, where they had their second child, Sylvia. Later in life, Mr. and Mrs. Slade parted ways. Sylvester remarried while Clorease enjoyed life with her daughter watching her two young grandsons grow up. Clorease obtained a position at the Veterans Administration where she held several positions until her retirement as a computer technical assistant. She was the recipient of numerous Outstanding Employee awards for her diligence during her employment. During the first winter season she experienced after her retirement from the Veterans Administration, she lamented with a smile how nice it was in the morning to watch the snow falling through her bedroom window knowing she did not have to drive through it to get to work. A loving, devoted mother and grandmother, she was gentle and kindhearted always giving and helping whenever and wherever she could. She made donations to missionary aid for the Country of Haiti; drove elderly members to church for several years; received an award for her volunteer work at her grandson Kyle’s elementary school; and was a member of the Wissahickon Civic Association, Philadelphia. Clorease was also a longtime member of The First Baptist Church of Steelton, Harrisburg, PA. Mom loved to sing. She sang soprano for the Paul Roberts Singers of Philadelphia and various other choirs during her lifetime. We remember during our childhood years hearing mom’s voice resonate throughout our home. As her health declined, she was cared for mostly at home by her daughter Sylvia and grandsons, Kyle and Dimitri. She was able to remain in her home until her transition on Sunday, June 17, 2018. Along with her parents, she was also preceded in death by her brother, McKinnley Lee. She leaves to honor and cherish her legacy of faith, love and devotion her son, John Slade of Newark, DE; her daughter, Sylvia Slade of Philadelphia, PA; two grandsons, Kyle Dudley and Dimitri M. Reeves of Philadelphia; two step-granddaughters, Georgette Louis-Jacques of Upper Marlboro, MD, and Samantha Plymale of Newark, DE; sister, Dorothy L. Cherry of North Carolina; as well as other family members and friends. We have been highly blessed and honored to have been loved by this truly wonderful mother, grandmother, first and foremost, Child of God. Submitted with Love by John, Sylvia and Family

Clorease was born November 10, 1938, in Indian Woods, North Carolina, daughter of the late George W. Lee and Mary Smallwood Lee. George and Mary were farmers, and Clorease grew up on the farm where her parents taught her all aspects of growing... View Obituary & Service Information

The family of Mrs. Clorease Lee Slade created this Life Tributes page to make it easy to share your memories.

Send flowers to the Slade family.