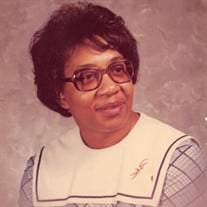 On the morning of Tuesday May 10, 2022, our beloved Clora, affectionately referred to by loved ones as Clorie, became absent from the body, present with the Lord. At the time of passing, Clora was graced to see 80 years of life. A native of Wagram, North Carolina, Clora was born on September 18, 1941 as one of nine children to William Graham Matthews Sr., and Jennie Mae Matthews, who both preceded Clora in death. Clora relocated to Harrisburg, PA where she lived the majority of her adult life. She later relocated to North Carolina but returned to PA. Clora spent the last 4+ years of her life as a resident of the Middletown Home in Middletown, PA. Clora held a number of positions including the Harrisburg Hospital (now UPMC), American Airfilter, GC Murphy Co. in Harrisburg, LOF and Nic’s Pic Quick of Wagram, NC. She received her CDL to work as a licensed tractor trailer driver. She demonstrated a skill set that landed her positions spanning across the commercial, hospitality and food service industries. Clora met and married her husband, Robert ‘Tutor’ Martin Spears III, in Harrisburg, PA who preceded her in death. Clora is survived by her four children: eldest son, Robert M. Spears, IV of Spring Lake, NC & wife Melissa; her three daughters, Dorothy J. Spears, Adraine E. Thompson and Juanita A. Spears, all of Harrisburg, PA. She is also survived by her 5 grandchildren: LaTreese C. Spears, Amber N. Spears, Alana C. Thompson, Kylan Spears all of Harrisburg, PA; and Briana C. Spears of Chicago, IL. As one of nine children, Clora is survived by her four siblings; brothers, William G. Matthews Jr. of Wagram NC, Albert Daniel Matthews of Richmond, VA; sisters, Dorothy M. McWhite and Fannie M. Thompson, both of Harrisburg, PA and sister in law Catherine M. Matthews of Wagram, NC. She was preceded in death by 3 brothers, Thomas, Walter & Albert Matthews and sister Anne Jeffries. Clora is also survived by her beloved nieces, nephews, a brother in law and sisters in law, cousins & family friends. In her last days before departure, Clora rededicated her life to Christ and sang of God’s great joy; she was confident in being a child of God. Clora is deeply loved by her family and will be missed unimaginably. Her family finds joy in knowing she is no longer suffering and they will see her again. In light of COVID-19 precautions, there will be a private family viewing in Harrisburg, PA. Additional arrangements for Clora’s final resting place and burial will be at Matthews Memorial Cemetery in Wagram, NC (livestreamed for Clora’s loved ones to attend virtually). FAMILY AND FRIENDS ARE ENCOURAGED TO CLICK ON THE SHARE A MEMORY TAB TO POST VIDEOS, SHARE MEMORIES, CONDOLENCES, REFLECTIONS OR SIMPLY YOUR NAME.

On the morning of Tuesday May 10, 2022, our beloved Clora, affectionately referred to by loved ones as Clorie, became absent from the body, present with the Lord. At the time of passing, Clora was graced to see 80 years of life. A native of... View Obituary & Service Information

The family of Clora Virginia Matthews Spears created this Life Tributes page to make it easy to share your memories.

Send flowers to the Spears family.