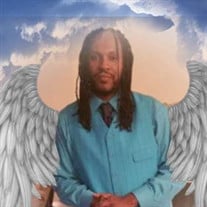 Calvin, son of Cordelia Hughes and the late Shirley Hughes Jr., was born September 20, 1969, in Greensboro, North Carolina. He graduated from Harrisburg High, John Harris Campus, Class of 1989. At a very young age, Calvin assumed the role of caring for his family. He accepted this responsibility with loving strength and maturity. Over the years, he held numerous jobs; however, following a serious and near-fatal accident which Calvin survived by God’s grace and his mother’s prayers, he decided to pursue higher education and career goals. God turned his life around, and he became a servant of the people always willing to help anyone and everyone. He earned degrees from Penn State University, Messiah College and Chambersburg University. Calvin had a special and loving heart for children. Upon becoming licensed as a Registered Nurse, he accepted employment as a Psychiatric Nurse working with “at-risk” children at Schaffner Youth Center and at the Pennsylvania Psychiatric Institute (PPI) working with children with mental health issues. Presently, he was employed by Ameri Health Caritas. Calvin was united in Christian fellowship with Gospel Fellowship Church under the pastorate of Bishop William Dallas. He loved the Lord and served as a Security Guard at his church. He loved to sing and was a “die-hard” Steelers fan. On Saturday, February 9, 2019, in his forty-ninth year, Calvin Lemont Hughes departed this life leaving to cherish and honor a legacy of love, strength, and a faithful servant, his mother, Cordelia Hughes; sisters, Shirley Hughes, Lisa Hughes-Bobbitt; brother, Mark Hughes; sons, Alberto Carrington, Donovan Montgomery; fiancée, Grace Katayi; one grandchild, Amari Latayi known as “Lil Suzzy;” other relatives and friends.

The family of Mr. Calvin Lemont Hughes created this Life Tributes page to make it easy to share your memories.

Send flowers to the Hughes family.