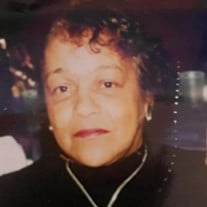 America Varline Penn-Carter, daughter of the late Lott and Irene Penn, was born Saturday, August 1, 1942, in Harrisburg, Pennsylvania. Educated in the Harrisburg City Schools, she graduated from the former John Harris High School, Class of 1959. On June 30, 1960, she united in marriage with the late Chester Carter Sr., and from that union, two sons and two daughters were born. She worked for many years as a Certified Nursing Assistant at the Harrisburg Hospital and Homeland Center before retiring in 1988. On the morning of Sunday, March 6, 2022, America Varline Penn-Carter transitioned from Grace to Eternal Glory while at her Harrisburg home surrounded by her loving family. Along with her parents and her husband, she was preceded in death by two sisters, five brothers and two grandchildren, Vernetta Prather and Anthony Carter. She leaves to carry on her legacy two sons, Chester Carter, Brian Carter (Michelle); her two daughters, Venessa Carter-Jefferson, Anquinette Carter; her grandchildren, Shawnwonna Cuff, Tiera Turner, Kiana Carter, Shannon Jackson, Antwaun Carter, Anthony Jefferson, Jamaal Carter, Shyheme Jefferson, Paula Singleton, Joseph Singleton; twenty-four great-grandchildren and a host of nieces, nephews, other family members and friends. A PRIVATE MEMORIAL SERVICE WILL BE HELD AT THE CONVENIENCE OF THE FAMILY. FAMILY AND FRIENDS ARE ENCOURAGED TO CLICK ON THE SHARE A MEMORY TAB TO POST VIDEOS, SHARE MEMORIES, CONDOLENCES, REFLECTIONS OR SIMPLY YOUR NAME.

The family of America Varline Penn- Carter created this Life Tributes page to make it easy to share your memories.

America Varline Penn-Carter, daughter of the late Lott and Irene...