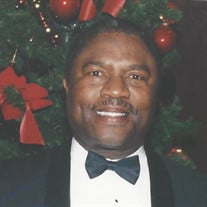 ~~~~~~~~~~~~~~~~~~~~~~~~~~~~~~~ “We are confident, I say, and willing rather to be absent from the body and to be present with the Lord.” II Corinthians 5:8 ~~~~~~~~~~~~~~~~~~~~~~~ Alfred was born Monday, April 16, 1945, in Harrisburg, PA, son of the late Thomas E. Williams Sr. and the late Bertha M. Brown Williams. Educated in the Steelton, PA, and Harrisburg, PA, School Districts, he was an honor graduate of the former John Harris High School, Class of 1963, where he not only excelled academically, but athletically as well. He was the first African American quarterback at John Harris. During Alfred’s sophomore year, the John Harris football team celebrated an undefeated season. During his senior year, the team was undefeated and ranked nationally in the Patriot-News Parade Edition. Alfred’s advanced educational quests included graduation (1965) from R.E.T.S. Electronics School, Upper Darby, PA; attendance at Duke University, Durham, NC, Executive Management Training; as well as Penn State University, Middletown, PA. A decorated soldier in the United States Army, he served honorably during the Vietnam War being 1st Air CAV DIV and recipient of the Purple Heart Medal. Alfred was also a member of Veterans of Foreign Wars, Mechanicsburg, PA. After thirty-five years of service, he retired from Bethlehem Steel Corp., Steelton, where he held the positions of Electrician, Trades Instructor, General Foreman and Superintendent of all Mechanical and Electrical personnel throughout the plant. Having accepted Jesus Christ as his personal Savior many years ago, Alfred was a former member of The Greater Zion Missionary Baptist Church, Harrisburg, and attended The First Baptist Church of Steelton. Fishing, music, traveling, reading and entertaining were among his life passions. An invitation to Alfred’s Annual Fish-Fry held at his Susquehanna Township home was to be coveted. Alfred exemplified proud Black manhood through his dedicated, unselfish love for his family, especially his children, grandchildren and siblings. He was a loyal and true friend to many throughout his life, and he was always willing to help anyone. At seventy-two years of age, while at the Penn State Hershey Medical Center, Hershey, PA, on Tuesday, September 19, 2017, the angels came to escort Alfred safely into the arms of his Heavenly Father joining in eternal life his parents and his five siblings, Thomas E. Williams Jr., Winnie L. Anthony, Vivian Shelley, Victoria Williams and Helen Williams. Alfred Harris Williams leaves to cherish and emulate his honorable legacy, son, Kyle Williams and his wife Karniesha of Raeford, NC; daughters, Opal Shaw and her husband Richard, Veronica Belcher, Pamela Prater and husband Lawrence and Leslie Lawson; brother, Jacob Williams and his wife Veronica; sisters, Leslie Opara and Joanna Williams; aunt, Margaret Lewis; friend, Janet Romberger; grandchildren, Justin, Nikolas, Gary, Domonique, Devunye and Christian, great-grandchildren, other relatives and friends. A Life Loved, A Life Shared, A Life To Be Remembered!

The family of Mr. Alfred Harris Williams created this Life Tributes page to make it easy to share your memories.