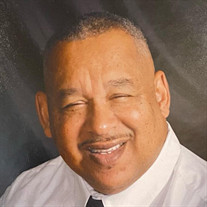 Alfonso Z. Penn Jr. was born Monday, February 16, 1953, in Harrisburg, PA, the eldest of four children of Alfonso Z. Penn and Alice Chambers Penn. Alfonso received his formal education in the Harrisburg School System and was a proud graduate of the last class of the John Harris Pioneers, Class of 1971. He went on to serve in the United States Army and worked as a linesman for Pennsylvania Power & Light Company retiring as a supervisor after thirty-seven years of service. Alfonso was an avid sports fanatic; he loved watching and cheering for his favorite teams, the Villanova Wildcats and Philadelphia Eagles. He was well known as an umpire for the North East Baseball League and other youth baseball leagues throughout his city. On September 28, 1974, he married his beloved wife, Frances D. Brown. Their union brought about a son, Zeffy Alfonso Penn III; and a grandson, Zeffy Alfonso Hutchison-Penn IV. Together they would become a solid foundation for which an unwavering faith and the love of family were built. If you knew him, you knew there was nothing more important to him than family. He was a gentle giant with so much love to share. If there was a family gathering, he made sure you knew you were expected to be present, especially Christmas. His corny jokes and laughter would fill the room. What he began as another way for the family to gather, bowling on New Year’s Eve, became an annual family tradition that continued for fifteen years straight. He never missed a year; he was present even when he was no longer able to bowl. On Friday, December 25, 2020, on the day of Birth of his Lord and Savior, on his favorite holiday, Christmas, he accepted his personal invitation to an eternal celebration and transitioned into eternal rest. He was predeceased by his parents, Alfonso Sr. and Alice Chambers Penn; and his father- and mother-in-law, Harold and Mary (Gonzales) Brown. He is survived by his loving, devoted wife, Frances D. (Brown) Penn; son, Zeffy A. Penn III; grandson, Zeffy A. Hutchison-Penn IV; brother, Nathaniel E. Penn; sisters, Lavetta D. Penn and Lori Ann (Penn) Simpson; brother- in-law, Harold Brown Jr.; sisters-in-law, Chloe Appleberry, Patricia Heyward (Elijah), and Carole Proctor (Lacotis); a host of nieces, nephews, great-nieces, great- nephews, a great-great-niece, an uncle, an aunt, cousins, family and friends. FAMILY AND FRIENDS ARE ENCOURAGED TO CLICK ON THE SHARE A MEMORY TAB TO POST VIDEOS, SHARE MEMORIES, CONDOLENCES, REFLECTIONS OR SIMPLY YOUR NAME ALLOWING THE FAMILY TO KNOW YOU ARE THINKING OF THEM. CLICK ON THE PHOTOS & VIDEOS ON-LINE STREAMING OF SERVICE TAB OR MEDIA TAB (MOBILE) AND TRIBUTE WEBCAST TO VIEW.

The family of Alfonso Z. Penn Jr. created this Life Tributes page to make it easy to share your memories.