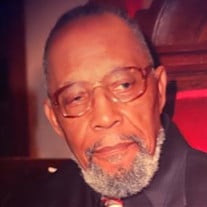 Lift Up Your Heads, O Ye Gates; Even Lift Them Up, Ye Everlasting Doors; And The King of Glory Shall Come In Psalm 24:9 Rev. Dr. A. Addison Cash was born on June 13, 1924 in Memphis Tennessee. As a child and young man he was known by his first name which is Arthur. Arthur left home at age 14. Although he was under age he joined the Army during war time as a Private and was honorably discharged as a Tec 5. He will forever be remembered as a World War II veteran. After leaving the Army, Arthur’s travels took him to St. Louis, MO where he answered God’s call on his life. He became an ordained minister and began preaching God’s word. His travels and ministry then took him to Trenton, NJ where he met and married Marie G. Kennedy in 1956. He was preceded in death by Marie G. Cash in 2010 after 54 years of marriage. Also his eldest son Larry D. Cash preceded him in death in 2013, and his brother, Alfred Cash. Rev. Dr. Cash pastored a number of churches up and down the east coast for 65 years. Some of the cities in which he pastored included Trenton, NJ, Mappsville, VA, Salisbury, MD and Houston, TX. With a heart and mind of obedience to God, he was always willing to take the next church assignment. In 1969 Rev. Dr. Cash and the family moved back east where he became the pastor of St. James AME Zion Church in Allentown, PA where he was instrumental in significantly growing the congregation and helping to build a new church. In 1975 he became the pastor of Harris AME Zion church in Harrisburg, PA. Prior to his last pastoral assignment at New Jerusalem AME Zion church in Steelton, PA, he was Presiding Elder of the Philadelphia/Baltimore District for 6 years. While being a fulltime pastor, husband and father of six children, Rev. Dr. Cash went to college and earned a Bachelor’s Degree from Kutztown State College (Kutztown, PA), a Master’s Degree from Lehigh University (Bethlehem, PA) and two PhD’s one of which is a Doctorate of Divinity and the other Doctorate of Theology. Rev. Dr. Cash was a 33rd Degree Mason and brother in Alpha Phi Alpha Fraternity. In November 2010, Rev. Dr. A. Addison Cash married Ruth Fleming Ferguson at Wesley Union AME Zion church, their home church. As pastor emeritus at Wesley he continued to preach when called upon and also taught Bible study which they both attended regularly. Together they enjoyed studying God’s Word and participating in various church ministries. They also enjoyed dining out, traveling to new places and cruising the world. Ruth Cash was a loving and devoted wife until his passing on Wednesday, January 27, 2021. Rev. Dr. A. Addison Cash leaves to celebrate and cherish his memory, his loving and devoted wife Ruth; one sister, Freida Cash (CA); children, Raymond D. Cash, Wanda B. Chenault, Michael A. Cash and Kimberly Baskins-Hunter (Donny), all of Harrisburg, PA, Lecretia Cash Faulcon of Riverview, FL, E. James Cash (Linnecko) of Loganville, GA, and Sheila Cash of Allentown, PA; grandchildren, Jason Cash (Allentown, PA), David Archer (Della) (Hbg, PA), Michelle Martin (Troy) (Hbg, PA), Rachel Cash (Hbg, PA), Nicole Sealey (Virginia Beach, VA), Shawn Cash (Hbg, PA), Ikeia Cash-White (Ceon) (Allentown, PA), Lauryn Huggins (Christopher) (Loganville, GA), Alex M. Pettis (Hbg, PA), Lamont Oliver Jr. (Hbg, PA), Lance Terrell Faulcon (Brandon, FL), Deniesha Dade (Middleburg, VA), Ashaad Reid (Hbg, PA), Aneisha Reid (Hbg, PA), Nicolas Anderson (Louisville, KY), Jaylynn and Jizelle (Loganville, GA); 29 great-grandchildren, and a host of nieces, nephews, spiritual sons and daughters and friends. Giving God all Glory, Honor and Praise, Lovingly Submitted by the family of Rev. Dr. A. Addison Cash FAMILY AND FRIENDS ARE ENCOURAGED TO CLICK ON THE SHARE A MEMORY TAB TO POST VIDEOS, SHARE MEMORIES, CONDOLENCES, REFLECTIONS OR SIMPLY YOUR NAME. CLICK ON THE PHOTOS & VIDEOS ON-LINE STREAMING OF SERVICE TAB OR MEDIA TAB (MOBILE) AND TRIBUTE WEBCAST TO VIEW SERVICE.

Lift Up Your Heads, O Ye Gates; Even Lift Them Up, Ye Everlasting Doors; And The King of Glory Shall Come In... View Obituary & Service Information

The family of Rev. Dr. A. Addison Cash created this Life Tributes page to make it easy to share your memories.

Lift Up Your Heads, O Ye Gates; Even Lift Them Up, Ye Everlasting...

Send flowers to the Cash family.