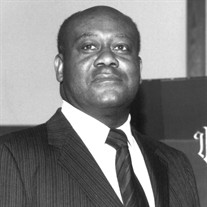 Reverend Willie Phillips, son of the late Lee Phillips and Carrie Wallace Phillips, was born Sunday, June 19, 1927, in Rock Hill, South Carolina. Reverend Phillips received a diploma in the field of Horticulture and had a special interest in the study of tree farming. A World War II United States Army Veteran, he was awarded the EAME Service Medal with two Bronze Service Stars, the Good Conduct and World War II Victory Medal. His employment path included Harrisburg Police Department and retirement from Benardi Brothers. He was a member of Harris AME Zion Church and affiliated with New Anointed Christian Fellowship Ministries serving with the Ministerial Staff and as Assistant Minister. Reverend Phillips was also a former member of the Fraternal Order of Police as well as a Cub and Boy Scout Leader. At the blessed age of ninety-three while at the Middletown Home, Middletown, PA, on Wednesday, December 30, 2020, Reverend Willie Phillips transitioned from labor to reward joining in eternal life his parents, his wife, Edna A. Ruth Phillips, and his siblings. Memories of Reverend Phillips will be honored and cherished by his children: son, Tom Reid (Jonita), son, Willie J. Phillips, daughter, Deborah Sims, all of Harrisburg, PA, and son, Stephen Phillips (Joan) of Atlanta, GA; six grandchildren, ten great-grandchildren, three great-great-grandchildren, one godchild, other family members, and his church family. FAMILY AND FRIENDS ARE ENCOURAGED TO CLICK ON THE SHARE A MEMORY TAB TO POST VIDEOS, SHARE MEMORIES, CONDOLENCES, REFLECTIONS OR SIMPLY YOUR NAME ALLOWING THE FAMILY TO KNOW YOU ARE THINKING OF THEM. CLICK ON THE PHOTOS & VIDEOS ON-LINE STREAMING OF SERVICE TAB OR MEDIA TAB (MOBILE) AND TRIBUTE WEBCAST TO VIEW.

The family of Reverend Willie Phillips created this Life Tributes page to make it easy to share your memories.

Send flowers to the Phillips family.