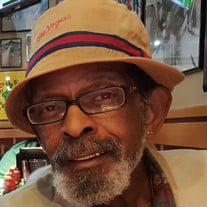 William H. Spinner Jr., was born Saturday, December 5, 1942, in Steelton, PA, son of the late William H. Spinner Sr. and the late Marie Dandridge Spinner. “Fuzzy,” as he was known by family and friends, received his formal education in the Steelton School District where he graduated from Steelton-Highspire High School. He retired from both the Dauphin Manor Nursing Home and the Harrisburg School District. An avid Pittsburgh Steelers fan, Fuzzy loved to dress, dance, cook, clean and was known to be a “neat freak.” Never idle, he was always doing something. He was a member of the Top Class Social Club as well as a former member of Tabernacle Baptist Church. In his seventy-fifth year, while at the Gardens at West Shore, Camp Hill, PA, on Tuesday, May 15, 2018, Fuzzy transitioned from this life into eternal life joining his parents, William Sr. and Marie Spinner; his sister, Gwendolyn Spinner; his grandmother, Madgie Dandridge; and other loved ones. Treasured lifetime memories will be shared by his children, Tracey Spinner of Harrisburg, PA, William H. Spinner III of Waldorf, MD, Paris Robinson of Jonesboro, GA, and Tanita Garnett of Harrisburg; one brother, James Spinner Sr. and his wife Janice of Harrisburg; and two sisters, Louise Stevenson and husband Cassie and Clara Spinner, all of Harrisburg. His memory will also be honored and cherished by his four grandchildren, one great-grandchild, several nieces and nephews, other relatives and friends.

The family of Mr. William H. "Fuzzy" Spinner Jr. created this Life Tributes page to make it easy to share your memories.

Send flowers to the Spinner family.