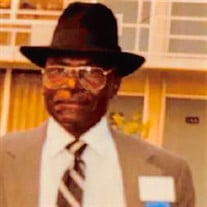 William Hankerson Sr., lovingly known as “Fat,” was granted his wings on October 1, 2021, at the age of 96. He was born February 15, 1925, in Steelton, PA, to the late Samuel Hankerson and Ella Foreman Hankerson. He was raised by his Uncle Mose and Aunt Carrie Foreman Oliver where he resided in Girard, Georgia. There he grew up working hard, building a work ethic that he would later pour into his family which would become his legacy. Fat met the love-of-his-life, Ethel Mincey Hankerson at the age of 17; they then got married and had 15 children, 10 boys and 5 girls. William worked many jobs throughout his life to support his family sometimes working two laborious full-time jobs. In 1965, William and his wife decided to move to Eden, MD, where he worked on his farm and did construction with Malone and Phillips from where he retired after over 25 years. In 2015, William moved to Harrisburg, PA, to live with his daughter Mozelle. William was not only a hard worker, but he was a man of strong faith in Christ which has sustained his family throughout his life and for many generations to come. William was a God-Fearing man; he reassured that his children had a foundation in understanding about the Lord. When living down south, he made sure they attended church every Sunday and checked in to make sure they told him what they learned. He also loved working on cars and instilled that passion into his boys. His favorite team was the Baltimore Orioles, and he loved to watch a good ball game. William’s strong beliefs and values that he instilled in all his family was “nothing comes easy; you have to work for what you want.” He always taught his children to do what’s right and would always say, “God will bless you if you do the right thing.” Family was everything to William; he loved his children, grandchildren and family. He would do everything to help countless people throughout his life. He also loved to listen to and sing hymns which were very often in his latter days. His sense of humor was always sure to make you laugh. He is survived by 5 daughters and 7 sons, Mozelle (Hankerson) McDowell, Rosalee Johnson (Herschel), Ethel Mae (Hankerson) Copes, Lorine Hankerson, Lottie Hankerson, Richard Hankerson, Jake Hankerson (Phyllis), Harvey Hankerson, Roger Hankerson (Sharon), Alfred Hankerson (Phyllis), Earnest Hankerson (Lisa) and Lawrence Hankerson (Angie). He also leaves 41 grandchildren, 90 great-grandchildren, 24 great-great-grandchildren and a host of nieces, nephews, cousins and friends. He was preceded in death by his wife Ethel and his 3 sons, William Hankerson Jr., Louis Hankerson and Rufus Hankerson. FAMILY AND FRIENDS ARE ENCOURAGED TO CLICK ON THE SHARE A MEMORY TAB TO POST VIDEOS, SHARE MEMORIES, CONDOLENCES, REFLECTIONS OR SIMPLY YOUR NAME.

The family of William "Fat" Hankerson Sr. created this Life Tributes page to make it easy to share your memories.

William Hankerson Sr., lovingly known as “Fat,” was granted his...