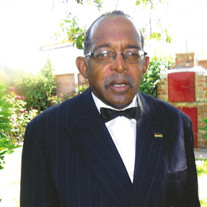 Warren Ray Woolfolk, Sr., known to all as “Butch,” age 78, of Harrisburg, Pennsylvania, went to be with the Lord on Monday, February 14th, 2022, at his home in Inglewood, California. He was born on January 19th, 1944, to the late Briscoe Conklin Woolfolk and Louise Beatrice (Banks) Woolfolk, and grew up in the Allison Hill section of Harrisburg, Pennsylvania, aka Summit Terrace. After graduating from John Harris High School, he joined the U.S. Air Force at 19 years of age, and was stationed in Lompoc, California, where his only daughter was born. He also met a lot of his extended family in California during that time which was one of his many highlights in life as Butch loved being with his family. After Butch’s honorable discharge from the U. S. Air Force, he moved back home to Harrisburg, Pennsylvania, for several years until receiving a job offer to relocate with Bohemian Liquor in Los Angeles, California, which was very exciting to him because it gave him an opportunity to unite with more family once again. This is where he would meet and marry Sheila Laverne Jones, his beloved wife of almost 40 years. He worked for Bohemian Liquor for 30 years and after retirement became the founder and owner of S&B Lien Sales. Butch truly lived life to the fullest, always finding a way to get in a game of basketball, a tennis match, or fishing expedition. A lover of Tastykake apple pies, old cars and german shepherd dogs, he never missed an opportunity to let his loved ones know when he was spending the day out working on his cars, or in the yard playing with his “two best friends,” Zeus and Max. A man who was passionate about and dedicated to at-risk youth, he volunteered with the Darby Youth Program where he served as a mentor to young men. He also trained youth in track and field and went above and beyond to ensure that each team member had the attire, equipment, and transportation they needed. Butch was actively involved in his community and never missed a moment to offer his opinion or lend a helping hand. Whether giving advice to City Council members on ways to better the community or going door-to-door in the neighborhood to collect money for a fellow neighbor that may have been impacted by a loss. He is survived by his wife, Sheila Woolfolk; daughter, Angela Blackston (Allen); son, Warren “Butch” White; brother, Brian Woolfolk; sister-in-law, Marilyn Jones; brothers-in-law; William Jones II (Pauline), Jefferson Hall, Sr.; grandchildren, Amber Blackston, Ariana Watson (Isaiah), Nky White and Taylor White; great-grandsons, Kadyn Harrison and Jace Watson; nieces, Cathy Daniels (Steven), Dori Stewart, Margaret Banks-Hackman (Ronald), Evelyn Ferguson, Shanae Jones, Patrice Quisenberry; nephews, Douglas Banks, Jr., William “Billy” Banks (Sheila), William Jones, III, Jemmy Jones; great nieces and nephews, Maya Stewart, Tyler Stewart, Michael Stewart, Jr. (Godson), Rachel Daniels, Damai Stewart, and Jermai Stewart; goddaughter, Shariah Brown; and a host of nieces, nephews, cousins, other family members and friends. Butch was preceded in death by his mother, Louise (Banks) Woolfolk; father, Briscoe Woolfolk; sister, Elizabeth “Libby” Corbin; brother, Douglas Banks Sr.; aunts, Evelyn Banks and Miriam Banks; uncle, Richard Banks, Jr.; and sister-in-law, Barbara Hall. There was not a person that Butch met that he didn’t leave something for them to “ALWAYS REMEMBER” him by. I can safely say that to know him was to love him, and to love him was to know him, while those that did not know him, loved him from afar. FAMILY AND FRIENDS ARE ENCOURAGED TO CLICK ON THE SHARE A MEMORY TAB TO POST VIDEOS, SHARE MEMORIES, CONDOLENCES, REFLECTIONS OR SIMPLY YOUR NAME. CLICK ON THE PHOTOS & VIDEOS ON-LINE STREAMING OF SERVICE TAB OR MEDIA TAB (MOBILE) AND TRIBUTE WEBCAST TO VIEW SERVICE.

The family of Warren Ray "Butch" Woolfolk created this Life Tributes page to make it easy to share your memories.

Send flowers to the Woolfolk family.