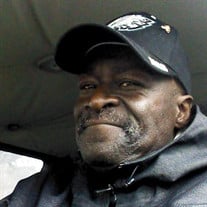 Walter Lee Miller Jr. (Buddy) was born December 19, 1960 in Philadelphia, Pennsylvania, to the late Walter Lee Miller Sr. and the late Diane E. Hatcher Miller. Walter received his formal education in the Philadelphia Public School System, and he later enlisted in the United States Army. He was known to be a risk-taker. Walter held several jobs in Philly and Harrisburg. In Philly, he played softball for various teams. Walter loved everything about his hometown to include the “Mummers,” the “Philadelphia Daily Newspaper” (which he loved to read), “Philly Pretzels,” “Water Ice,” and “Philly Cheese Steaks.” Walter was an avid Philly sports fan. He loved his Phillies, Flyers, 76ers, and most importantly, the Philadelphia Eagles. Although he loved his city greatly, he loved Teri more than anything, so he moved to Harrisburg, Pennsylvania, and on August 22, 1998, he married Teri Lynn. Walter and Teri were truly in love. Walter had a signature whistle which alerted his arrival. On Sunday, June 3, 2018, in Harrisburg, PA, at the age of fifty-seven, Walter departed this life joining in eternal life his parents, his son, Walter Lee Miller III, and his brothers, Ronald and Earl. He leaves to cherish irreplaceable memories his loving wife Teri; daughter, Diesha; grandchildren, Simir and Saadiya; adoptive daughter, Yashica; step-daughter, Char’le; step-sons, George (Dena), Eric, Steven (Kaisha), Daryl; step-grandchildren and step-great-grandchildren. He also leaves behind his sisters, Antionette (Eric), Melanie, and Rasheeda; brother, Timothy; step-sisters, Sheila, Jennese, Leslie and Sandra; step-mother, Alethia; Aunt Elaine (Jerome); Uncle Ronald (Doris); a host of nieces, nephews, cousins, and the Fowlkes and Stoney families. Lovingly Submitted, The Family “A Golden Heart Stopped Beating” God saw that you were getting tired and a cure was not to be, so He put His arms around you and whispered, “Buddy, Come with me.” With tears filled eyes we watched you suffer and fade away. Although we loved you deeply, we could not make you stay. A golden heart stopped beating, Hardworking hands were put to rest. God broke our hearts to prove to us He Only Takes the Best.

The family of Mr. Walter Lee "Buddy" Miller Jr. created this Life Tributes page to make it easy to share your memories.

Send flowers to the Miller family.