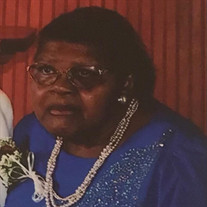 Virginia (Fox) Scott, born on June 26, 1925 in Spotsylvania, Virginia, was the third of six children born to the late Joseph and Vernonia (Tyler) Fox. Virginia attended John J. Wright High School in Spotsylvania, Virginia. She accepted the Lord as her Savior as a teenager at the Beulah Baptist Church in Spotsylvania, Virginia. When she relocated to Steelton, PA, she united with Emanuel Church of God in Christ and was baptized on July 9, 1944. Virginia was married to Benjamin Scott Sr. for seventy-three years. From their union, there are eight children. She worked as a dishwasher, did domestic work and worked at the tobacco factory in Steelton, PA, before becoming a professional homemaker. She loved to cook, sew, do upholstery, and work puzzles. Not known to many, Virginia could also draw. She watched many of her grandchildren while their parents worked. She did bible study with senior citizens who lived in her complex. She encouraged us to learn how to care for ourselves. She even taught some of us how to start a fire in a cast iron stove, use a long saw that had two handles, and made sure we stood up for ourselves and each other. She was welcoming and caring to all family and their friends. Virginia Scott went to sleep on November 28, 2020 to rest until the Lord returns. She was preceded in death by her father, mother and four brothers. Virginia is survived by her husband, Benjamin F. Scott, Sr.; five sons, Eddie (Katherine), Herbie (Mittlean), Purcell (Betty), Joseph (Beatrice), Richard (Penney); three daughters, H. Wendy Scott (Andrew Johnson), Veronica Scott, Marcia Scott-Williams (Nate Williams); stepson, Benjamin F. Scott, Jr. (Margaret); and her younger sister, Ellen Hicks (Minor). Virginia also has twenty-six grandchildren and a host of great-grandchildren, great-great grandchildren, nieces, nephews and cousins. FAMILY AND FRIENDS ARE ENCOURAGED TO CLICK ON THE SHARE A MEMORY TAB TO POST VIDEOS, SHARE MEMORIES, CONDOLENCES, REFLECTIONS OR SIMPLY YOUR NAME ALLOWING THE FAMILY TO KNOW YOU ARE THINKING OF THEM. ON-LINE STREAMING OF SERVICE. CLICK ON THE PHOTOS & VIDEOS TAB OR MEDIA TAB (MOBILE) AND TRIBUTE WEBCAST TO VIEW.

The family of Virginia Scott created this Life Tributes page to make it easy to share your memories.