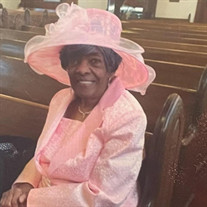 Virginia L. Payne-Rieves was born Friday, October 23, 1936, in Middletown, Pennsylvania, the eldest of eight children of the late Francis “Duchie” Howard Payne and the late Virginia “Sis” Clivia Colston Payne. Virginia, affectionately called “Puddie” by family and friends, attended Steelton Hygienic Elementary School, Steelton High School, OIC and Harrisburg Area Community College for theology studies. After thirty-two years of dedicated service, Virginia retired from the Commonwealth of Pennsylvania. She was a secretary of the Refugees under the direction of the late Patricia Tyson. Virginia was a member of Mount Zion Missionary Baptist Church, Steelton, PA, as a child. She served as an Usher and on the Nursing Board. She was a former member of St. Paul’s Missionary Baptist Church where she served as Vice President and Chaplin of the Senior Usher Board. She was also a former member of Christ Gospel Temple where she served as an Usher. She graduated from Imani Christian Theological Institute and was a Past Worthy Matron of the Order of Eastern Star, Esther Chapter I. Virginia loved her cowboy movies. When younger, she was quite the professional shopper, and she loved to frequently redecorate her home. Foremost, she always enjoyed her family especially when the grandchildren came along. While at her home in Harrisburg, PA, surrounded by loving family on Thursday, December 23, 2021, Virginia transitioned from time to eternity at eighty-five years of age. Along with her parents, she was preceded in death by her husband, Reginald L. Rieves; three brothers, Marshall L. Payne, Fredrick A. Payne and William “Billy” Colston. Loving, missing while forever cherishing irreplaceable memories are her daughters, Darlene Manning (Herman), Shirl Crummel and Juliet Rieves; her siblings, John Francis Payne, Shirley Travis (Robert), Margaret Fuller (George), Samuel Payne (Linda) and Michael Payne (Carol); her grandchildren, Johnathan, Shannin, Tony, Justin, Jared, seven additional grandchildren and 12 great-grandchildren; goddaughter, Rondel Lumpkin; best friend, Juanita Curtis; and a host of devoted nieces, nephews, cousins and friends. FAMILY AND FRIENDS ARE ENCOURAGED TO CLICK ON THE SHARE A MEMORY TAB TO POST VIDEOS, SHARE MEMORIES, CONDOLENCES, REFLECTIONS OR SIMPLY YOUR NAME. CLICK ON THE PHOTOS & VIDEOS ON-LINE STREAMING OF SERVICE TAB OR MEDIA TAB (MOBILE) AND TRIBUTE WEBCAST TO VIEW SERVICE.

The family of Virginia L. Payne Rieves created this Life Tributes page to make it easy to share your memories.

Send flowers to the Rieves family.