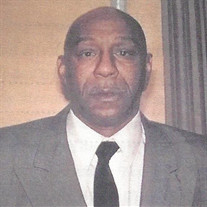 Tyrone was born in Harrisburg, PA, on Monday, September 12, 1955, the eldest of seven children of the late Fred L. and Doris Williams. Even though Tyrone was the shortest of his siblings, they still listened to him when he was put in charge. At a young age, Tyrone was united in Christian fellowship with Goodwin Memorial Baptist Church where he sang in the choir. You could hear Tyrone’s voice every Sunday coming from the choir loft. He needed no microphone; his voice was natural and very clear. Tyrone also sang with some of Harrisburg’s well-known choirs such as The Young Voices of Harrisburg directed by the late Olin Harris and the Walter Piper Singers. In the 1980’s, Tyrone was the opening act in the newly opened VIP Night Club, Strawberry Square, Harrisburg. One thing everyone knew about Tyrone, “He Could Sing.” As Tyrone grew older, he earned his nickname, “Trip,” while being one of the best bartenders and pool shooters in town. Tyrone was known to sing the top songs playing on the jukebox. People would just stop, listen and say, “Man that guy is a Trip; he should be on Soul Train.” Tyrone also became a member of the Cyrene Lodge #71, Harrisburg, and was a diehard Eagles fan. He talked about the Eagles even when it was not football season. He thought they were the best team ever, even though they just won their first Super Bowl this year; Tyrone was crazy like that. On Saturday, March 17, 2018, at the age of sixty-two, Tyrone transitioned into eternal rest. Not only was he preceded in death by his parents, but by his sister, Anna L. Thomas “Amina Bey.” He leaves to cherish many irreplaceable memories his children: sons, Tyrone Thomas II and Japhel McCleave; daughter, Tabitha Young, all of Harrisburg; fourteen grandchildren, one great-grandchild; his siblings, Fred Thomas (Karen), Nathaniel Williams (Marcia), Juanita Doe-Mack (Steve) and James Williams, all of Harrisburg; along with a host of nieces, nephews, other family members and friends. Tyrone will be deeply missed, but never forgotten. Every time the name “Trip” is spoken, the first person we will think of will be Tyrone. Lovingly Submitted by the Family of Tyrone “Trip” Thomas

Tyrone was born in Harrisburg, PA, on Monday, September 12, 1955, the eldest of seven children of the late Fred L. and Doris Williams. Even though Tyrone was the shortest of his siblings, they still listened to him when he was put in charge. At... View Obituary & Service Information

The family of Mr. Tyrone "Trip" Thomas created this Life Tributes page to make it easy to share your memories.

Send flowers to the Thomas family.