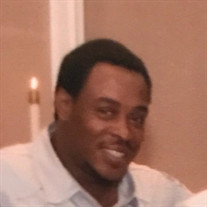 Life is but a stopping place. A pause in what’s to be. A resting place along the road, to sweet eternity. So as we celebrate the life of TRAVIS LAMONT WILLIAMS, family and friends wanted to capture just a glimpse of the fun and loving times. All of us are a work in progress. And Travis was a Christian that believed in the Power of Prayer. Not many knew how sickly Travis had become because he was a fighter, and trusted in God for total healing. His faith allowed him to love and help his family, friends, and even strangers. Travis never turned down an opportunity to bless others. Even when he didn’t feel well, he asked for a few minutes and later gave a helping hand. Not many can say that they had childhood friends into their adult life. Travis’ friends were his brothers. They were part of his family. And with that said, there were fights, laughs, fun times, low times (all the stuff that families go through) but at the end of the day, it was all love. To know him, you can agree that he enjoyed these three things: Keys, Cars, and Women. Turn to your neighbor and say AMEN!! Travis found cooking therapeutic. He would wake up in the middle of the night cooking wonderful meals for his love ones to enjoy like his famous meatloaf, homemade pizza, and more. Travis was the only person that didn’t know he was spoiled. He was a momma’s boy and daddy’s boy. He loved his parents! He was a lovable Dad, Son, Brother, Uncle, Cousin, and Friend. “Tra,” as called by many, will forever be missed. TRAVIS LAMONT WILLIAMS, age forty-three of Harrisburg, PA, was born on February 18, 1974. Travis transitioned into eternal life on September 19, 2017. He leaves to celebrate his life, his father Lester Pope (Nadine King); his mother, Juanita Williams, all of Harrisburg, PA; all of his children, Travia Williams, Elijah Williams, Lashae Griffin, Johnae Williams, Anyae Williams, Jhosiah Maddox-Jackson, Travis Williams Jr., Jhaion Maddox-Jackson, Brooklyn Williams, all of Harrisburg, PA; his siblings, Renita Mason of Virginia, Monica King of Georgia, Keshia Brooks (Linard Brooks), Nina King, Martise Scott (Trisha Scott), all of Harrisburg, PA.; and a host of nieces, nephews, cousins, and dear friends who will miss him dearly. Gone but never forgotten! Lovingly Submitted by the Family

Life is but a stopping place. A pause in what&#8217;s to be. A resting place along the road, to sweet eternity. So as we celebrate the life of TRAVIS LAMONT WILLIAMS, family and friends wanted to capture just a glimpse of the fun and loving... View Obituary & Service Information

The family of Mr. Travis Lamont Williams created this Life Tributes page to make it easy to share your memories.

Life is but a stopping place. A pause in what’s to be. A resting...